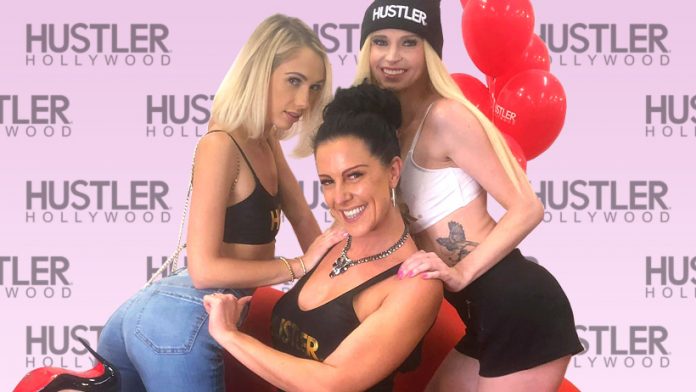 VENUS star Texas Patti is still on the path of success in the USA. The brunette beauty from the German city of Münster not only co-hosted XBIZ Europe with Manuel Ferrera for the European branch of the U.S. industry magazine XBIZ, but also was host of a new location for the legendary sex store chain Hustler in Los Angeles.

So now one of the most powerful media companies in the industry, XBIZ, came knocking on Texas Patti’s door. In the interview, she excitedly reported, »It was the CEO himself who called me and asked if I’d like to co-host XBIZ 2021 EU with Manuel Ferrera.«

Texas Patti didn’t have to think twice about that. She added, »This is the moment where you say to yourself, Ok Patti this is why you are doing all this. It’s a great honor to be given such an opportunity. Whether it’s for Venus, the AVN or XBIZ…. Getting offers like that is like Hansi Flick [Germany’s national soccer coach] calling personally.«

Even though the event was digital, Texas Patti had immense joy in the task: »Sure, I felt a little nostalgic to see all the colleagues but not being able to greet them in person as usual. But that’s the way it is at the moment. I am grateful that the people in charge of the trade shows go to such great lengths to continue to offer US SEXWORKERS something like this.«

After Larry Flynt’s death, his widow took over the management of the company. Knowing about the importance of the company for the history of erotica in the U.S., Texas Patti considers it a unique opportunity to work for Flynt: »An impressive woman… After her husband died, she didn’t bury her head in the sand, but rather took up the challenge and faced the situation with her great team. A role model in every way.«

From what we know of the German adult star, more exciting projects are likely to follow soon. If you want to stay up to date with her, you can follow Texas Patti via Twitter.