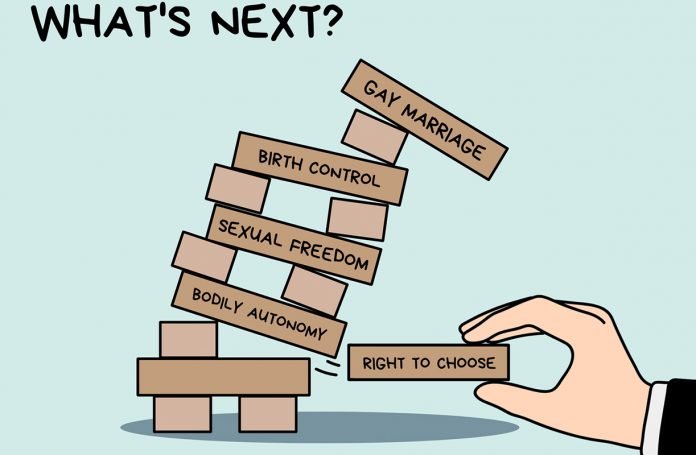 After the US Supreme Court ended the nationwide right to abortion by overturning Roe v Wade, a decade long consens saying that women have the right to chose what happens to their own body, the adult industry association Free Speech Coalition published a statement highlighting the specific problems that highly criticized judgement will create for the adult industry.

The influential trade group FSC has weighed in on the highly catastrophic end for abortion rights in the USA. The organisation published the following statement on its website:

No matter how you feel about abortion, the Supreme Court’s decision in Dobbs v. Jackson Women’s Health Organization overturning Roe v. Wade is a threat to our industry’s continued existence. The right to sexual privacy and bodily autonomy rests on the very same foundations as the right to terminate a pregnancy and the constitutional protections that we’ve come to take for granted are very much in the crosshairs.

While there is no right to privacy explicitly mentioned in the U.S. Constitution, the 14th Amendment says that the government cannot “deprive any person of life, liberty or property, without due process of law.” In 1965, the Supreme Court in Griswold v Connecticut found that “liberty” includes a right to be free from government interference in private decisions such as whether to use birth control.

If the government wants to infringe on a constitutional right, they not only need to show that it’s absolutely necessary to do so, but that there is no less-restrictive alternative available. This very high bar for evaluating laws that conflict with our constitutional rights is known as strict scrutiny and Connecticut’s reason for denying married couples access to contraception did not meet it.

A few years later in Stanley v. Georgia, the court extended the constitutional right to privacy it established in Griswold to include watching “obscene” (pornographic) films, observing: “Whatever may be the justifications for other statutes regulating obscenity, we do not think they reach into the privacy of one’s own home.”

And of course, in 1973’s Roe v Wade, the Court found that the right to privacy includes the right to terminate a pregnancy. A total ban on abortion did not meet strict scrutiny because there are less restrictive ways to accomplish the government’s goal of protecting “the potentiality of human life”.

The Ideology of the Court Determines Outcomes

In the following decade, several of the Supreme Court Justices who supported a fundamental right to privacy in Roe v Wade were replaced with justices who resisted the expansion of constitutional rights. In 1986, this more conservative court heard a case called Bowers v. Hardwick, in which two men who were criminally charged for having consensual sex in the privacy of their own home challenged constitutionality of laws outlawing sodomy. This group of Supreme Court Justices decided that in order to be included in the constitutional right to privacy, protections for gay sex must be “deeply rooted in this Nation’s history and tradition.” Because anti-sodomy laws were common in the 1800’s, they did not violate the Constitution.

By 2003, the court had added more liberal members who overturned Bowers in a case addressing the very same issue – the government’s ability to criminalize sodomy. Rather than focusing on whether a right was recognized in the 19th century, the court in Lawrence v. Texas decided that the right to privacy extends to private sexual conduct, and the criminalization of sodomy “furthers no legitimate state interest which can justify its intrusion into the personal and private life of the individual.”

These contradictory rulings are illustrative of the outcomes we can expect from judges who believe that our right to privacy limits government intrusion on what Americans do in their bedrooms – and those who don’t. But the debate doesn’t stop at how or with whom we choose to have sex. The question of whether the government can dictate what we’re allowed to pleasure ourselves with has already played out in two cases over state bans on sex toys, with ominous results.

Both Texas and Alabama passed laws criminalizing the sale of “obscene devices” (sex toys) on moral grounds. Violators faced heavy fines and jail time for the crime of selling pleasure products to eager buyers. In both states, the bans were challenged in court and the results were appealed all the way to the second-highest courts in the United States. In the Texas case, the Fifth Circuit struck down the law criminalizing of sex toys as because it violated the constitutional right to sexual privacy. In Alabama, the Eleventh Circuit relied on the same reasoning as Bowers (that laws protecting the use of sex toys did not exist in the nation’s history or traditions) to let the law stand. The ACLU petitioned the Supreme Court to hear the case, but they refused, leaving the constitutionality of laws that criminalize pleasure products in legal limbo.

What Dobbs Means for Our Industry

The cases discussed above offer a frightening preview of how the right to sexual privacy and autonomy will fare in this ideologically extreme Supreme Court. In Dobbs v Jackson Women’s Health Organization, the Supreme Court overturned Roe v Wade because laws banning abortion existed in 1868, so the right to an abortion is not “deeply rooted in this Nation’s history and tradition” and therefore not protected by the constitution. All of the rights previously recognized as part of our liberty from government intrusion will suffer the same fate.

Justice Clarence Thomas came right out and said so in his contribution to the Dobbs decision, calling the Supreme Court rulings that gave Americans the constitutionally-protected right to private sexual conduct, contraceptives, and marriage equality “demonstrably erroneous decisions” that need to be overruled. And while the other conservative justices insist that those rights are safe from future attack, why would we believe them?

Their own colleagues certainly don’t, which they make clear in the dissent, pointing out that either the justices who voted to strike down Roe don’t actually believe their own reasoning or “all rights that have no history stretching back to the mid-19th Century are insecure. Either the mass of the majority’s opinion is hypocrisy, or additional constitutional rights are under threat. It is one or the other.”

Either answer is bad for us. This decision is a direct invitation to every social conservative to pass laws that violate our fundamental rights to free expression and sexual autonomy. A court that truly refuses to recognize rights that were not protected in the 1800’s or that bases legal decisions on their own extreme “moral” intuitions is an existential threat to every sector of the adult industry and the millions of adults who benefit from our products and services. We do not have the luxury of complacency.

The threats are many: a Supreme Court hostile to sexual freedom, a slew of state and federal legislators hungry to criminalize or bankrupt us, and an extremely well-funded group of religious extremist organizations bent on codifying their own morality. But we have shown that we are powerful when we are a united front.

FSC is raising money to increase our lobbying capacity, mobilize to fight bad legislation, challenge bad laws in court, and elect better politicians. This Supreme Court decision is a wake up call. We need to listen.

To donate to the FSC Action Fund, click here.