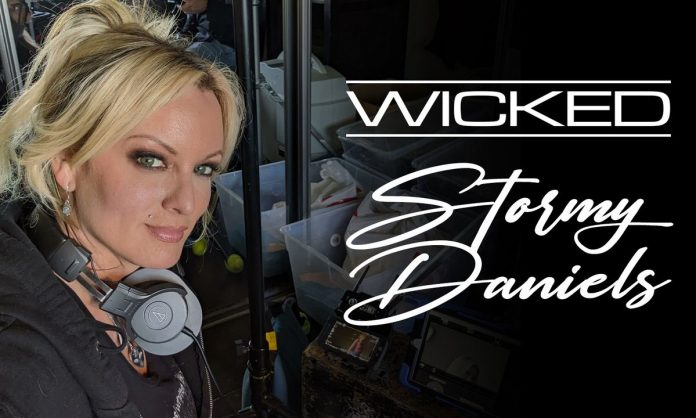 In February, Stormy Daniels signed a deal with Wicked, her old and new home, to become brand ambassador and exclusive director for the studio. Her first movie and comeback picture after four years of hiatus from directing will be the erotic thriller »Hysteria«.
The movie will feature Aiden Ashley, as well as Anna Claire Clouds, Seth Gamble, Casey Calvert, Ryan Driller and more.
Stormy Daniels commented on her comeback as a director: »I have to admit I was nervous – it’s been four years since I last directed a feature. So I went into this thinking, ‘I’ll ease myself in with a little two day shoot.’ But once I was reunited with my crew on-set, it was like we hadn’t missed a beat. I have the best crew, they are all incredibly gifted. As shooting progressed, we began adding more creative elements to the production. In true Stormy Daniels fashion, I found myself doing everything the hard way!«

She added: »“Our theme song is the original track ‘Hysteria’ by Deadsled Funeral Co. which is fronted by my Spooky Babes co-star Justin Loupe. He also knocked it out of the park as my special FX makeup artist by transforming Anna Claire Clouds into the scariest sexy monster I’ve seen.«

Axel Braun, head of Wicked, also commented on Stormy Daniels’ return to the studio: »Stormy is so creative and such a consummate professional, there was no doubt in my mind that she would turn in a great feature. She runs a tight ship and always treats her cast and crew with the utmost respect, which is why they are more than happy to give 110 percent to her projects. The atmosphere on the ‘Hysteria’ set was really amazing, everybody was just elated to have her back and did their best to help her fulfil her vision for this awesome movie. As she’s proved over and over again, Stormy is an inspired writer, a massively talented director and literally a force to be reckoned with, and I am just immensely proud of her and thrilled to have her back where she belongs, with the Wicked family!«

Wicked is describing the movie as an erotic thriller with a lot of suspense and action. It states, Hysteria »is the story of Anna (Ashley), an accomplished author, and Christine (Clouds), an artist. On the surface, this loving couple’s marriage appears to be harmonious and beautiful. But beneath this veneer of domestic bliss lurks an undercurrent of mistrust that threatens to consume their relationship.«Stormy Daniels seems to be happy and comfortable coming back to her career as director: »I was excited to work with some of the new talent. Which is why my cast is a blend of newer stars and veterans. Seth Gamble of course needs no introduction, he’s the best male actor in the industry, and I knew I wanted to work with Aiden Ashley again, she was brilliant and 100 percent authentic. And Anna Claire Clouds is, seriously, my favorite new actress. My crew had some new members as well – including the amazing James Avalon, with whom I’d never worked despite all my years in the business. It was a wonderful experience and his camerawork looks terrific!«

The movie is scheduled to be released in Summer 2022. Additional information can be found on wicked.com.