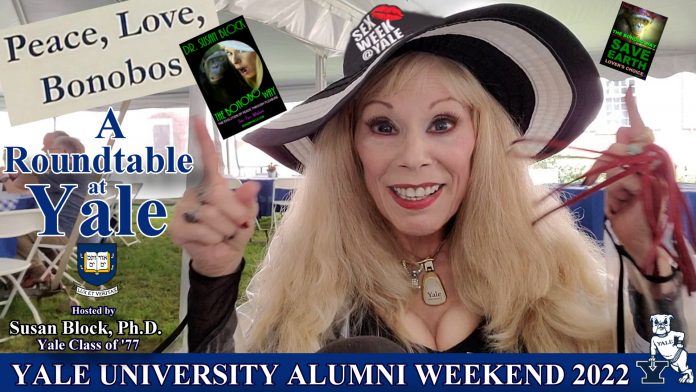 “I’m not your typical Yale alumna,” says Block, “I’m not a billionaire or even a millionaire—legacy or self-made—nor a tenured academic, lawyer or stockbroker, like many of my distinguished classmates. I’m a sexologist, the only one in my class… at least the only one that’s out of the closet about it.”

“Peace, Love, Bonobos (and Sex Week at Yale)” presents Block’s unique sexological perspective on current events and relationships among humans and other great apes in an intimate Roundtable discussion at her 45th Yale reunion. Mixing personal anecdotes with primatological research, history and the news, Block compares the remarkable “Make Love Not War” culture of the bonobo apes, humanity’s closest living cousins, to our own. Taking questions from her fellow alumni, Block contrasts the “Bonobo Way” of peace through pleasure, female empowerment, male well-being, inclusivity, cooperation, ecosexuality and sharing resources with the “Killer Ape” path of extreme inequality, competition, scarcity, ammosexual gun culture, environmental devastation and war—including the war crimes of some of her fellow Yale alumni, such as U.S. President George W. Bush (Yale Class of 1968)—that have ballooned into a globally destructive state of permanent war that Block calls “Perma War—like Perma Press, except instead of pants that won’t crease, it’s wars that won’t end.”

Along with her “Yale Husband” of 30 years, Maximillian R Lobkowicz di Filangieri, Block tells the true tale of the rise and fall of Sex Week at Yale (2002-2012), where she gave sex educational lectures and Master’s Teas each year, until the popular biannual Week was abruptly terminated by Yale President Richard Levin, under pressure from well-funded religious groups to find a scapegoat for unrelated problems caused by some of Yale’s most elite fraternities, including Delta Kappa Epsilon, of which George W. Bush, Jr., Brett Kavanaugh and Ron DeSantis happen to be an active member.

Will the Class of 2026 bring back Sex Week at Yale? Will the Bonobo Way prevail over the Killer Ape’s path of relentless destruction? What can our bonobo cousins teach us about ourselves and our potential for peace through pleasure? Take a ringside seat in Dr. Block’s “Peace, Love, Bonobos” Master Class, a Roundtable at Yale.

Read The Bonobo Way: The Evolution of Peace through Pleasure
Get a “Make Kink Not War: Be Bonobo” T-Shirt!