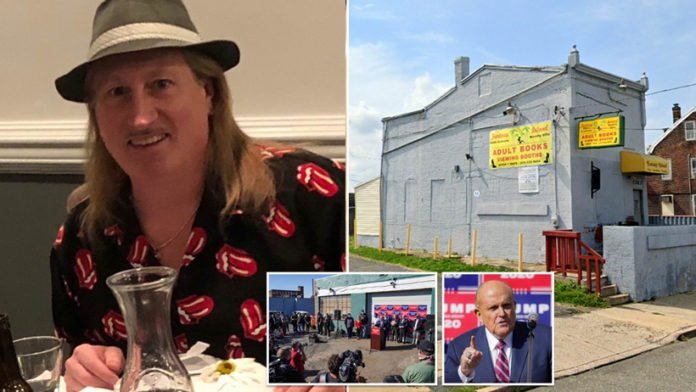 When the Trump legal team around former mayor Rudolph Guiliani tried to book the parking lot of a hotel in Philadelphia to do a press conference on their claims that there has been election fraud going on they made a rather funny mistake: they booked the parking lot of a garden center called Four Seasons Total Landscaping instead of the Four Seasons hotel. As the internet is filled with humour loving people the neighboring stores of the garden center – among them a sex shop – experienced a huge sales increase.

If you run an adult book shop in Philadelphia next to a garden center and your store is called Fantasy Island Adult Book Store, you probably don’t have many chances to increase your sales. In Donald J. Trump’s America though things happen that could be the plot of a very strange satire.

AVN stated that Bernie D’Angelo, the owner of the family-run Fantasy Island Adult Book Store – the retailer located next door to Four Seasons Total Landscaping in Philadelphia – has spoken about their store’s sudden brush with fame after media attending Saturday’s Trump campaign press conference made their name known around the world.

D’Angelo is trying to cope with the global interest in his store that was established in 1978 by his parents. In an interview with the ezine Slate he said: »I don’t know if I’ll ever trend like this ever again. I’ve been there since I was out of high school, and then I’ve been back-and-forth. I went back to school to become an electrician, and then I went out and opened up a few other businesses, pizza places and bulk food stores. And then my father asked me to come back to work and I’ve been there ever since. I’m 57 now.«

About the media frenzy in front of his shop he said: »I was inside and we didn’t know what was going on. One of our customers said, ‘There’s something happening, it looks kind of crazy out there.’ And I walked out and we saw all these vehicles pulling in. And I [thought] they were definitely in the wrong location, because we’re an industrial commercial area. I couldn’t understand why they would bring something of this caliber to our location, because there’s no real venue that would support something of this sort.«

D’Angelo immediately knew that the Trump campaign screwed up with the location for the press conference. As someone who lived and worked in Philadelphia his whole life he knew that they probably meant to book the Four Seasons hotel.  »There was no reason why they would be in this area. It’s funny. I’ve stayed at the Four Seasons. I know the difference between the two Four Seasons. One’s a landscaping business, and one’s a nice hotel.«

While the event itself was just mildly amusing, the sex shop owner quickly noticed a sudden increase in interest for his store. Especially on social media his accounts blew up with comments and messages. »My Fantasy Island Facebook page has been blown up. I’m past 7,000 people commenting on everything that’s been going on. I had to order some more stuff and ask the companies if they could physically pick up some stuff at my distributors or actually ask UPS if we could fast-track some of it. People in the neighborhood forget about us because we haven’t done any major, major advertising. We could never afford advertising like this. This is worldwide.«

D’Angelo added: »And we even sell hand sanitizer and stuff because the times have changed at the moment. So we’re following CDC guidelines.«