Berlin, January 22, 2021 – Despite the lockdown, DIE WELT DER VENUS II (THE WORLD OF VENUS II), the second book on VENUS Berlin, is about to be published and will be available for interested readers even with closed retail outlets everywhere in the country.

The publication of the second Venus book has been delayed for quite some time. A pre-presentation was canceled because VENUS Berlin was not permitted to open its exhibition halls in October 2020. Then the November and December release was halted because all stores had to go into lockdown, including the distributor, VPS Film-Entertainment GmbH.

Now that the lockdown has been extended again and it can be assumed that February 14 will not bring any change either, the publishing management has decided to make the book immediately available to interested readers. 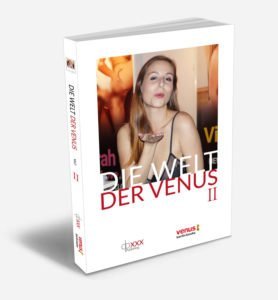 DIE WELT DER VENUS II is priced at 29,95€ incl. shipping. The limited and hand-numbered edition, with JENNY STELLA on the cover, sells for 39,95€. The limited-edition has a print run of only 50 copies.