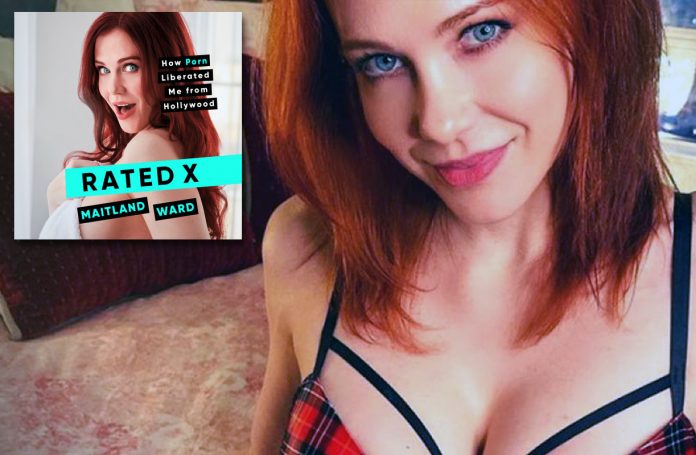 Maitland Ward who was a sitcom star in the 90s and could be seen in the former hit show »Boy Meets Girl«. After the series came to a close, Hollywood became thorny for her and after years of unsatisfying acting jobs Ward started adult modelling which made her so successful that she quickly became one of the hottest stars in adult entertainment today. By now, she works for the major studio Vixen Media Group and is a superstar of the kind much surpassing her early sitcom fame.

She models and performs exclusively with Vixen and for three years she has been the face for Vixen’s sub-brand Deeper.com. Ward earned many rewards and high profile coverage for movies like Drive and Muse, extremely high-end productions with wild and glossy glamour.

Ward said, »VMG has been such a huge part in my journey and my story in this book. I have had such an amazing experience with them starting with my first Blacked scene that broke all records and then Drive which catapulted me to award winning fame and now to starring in Drift which is a brilliant script directed by my collaborating partner Kayden Kross.«

She added, »Readers will really see what an original, heartfelt journey Kayden, Vixen and I have been on. My story couldn’t have fully flourished without their belief in me and support.«

Ward’s longtime collaborator Kayden Kross also commented on the release of the long-awaited book, »I am beyond proud of Maitland’s success as both an actress and now a published author. I remember a conversation from our first year working together, I knew then she would have a book.«
Kross is full of praise for her friend’s writing, »Maitland is an incredible writer—funny, humble, unfiltered, and an amazing talent at weaving these things together into something that doesn’t just sit on the surface. She provides a fresh perspective and sex-positive light for the adult industry. Her book is a beach read, a college read, a secretive flushed read after everyone has gone to bed.«
As a friend of Ward Kross was witnessing Ward’s writing project close by, »Watching this project develop from germination to completion has been one of the highlights of my career in adult. Rated X represents a first for the business and the only memoir to be published by a Vixen Media Group star. This is an incredible milestone and we’re thrilled to celebrate this moment with the recent release of Drift—a five-part feature on Deeper that runs parallel to Rated X and Maitland’s personal story.«
Her book tour started with a reading at the flagshop of the renowned bookstore chain Barned & Noble in Los Angeles. Fans had the opportunity to get their copy of the book signed and meet the super star.
If you want to know more about Maitland Ward, click here. The book is available on Amazon and everywhere else you can order books.