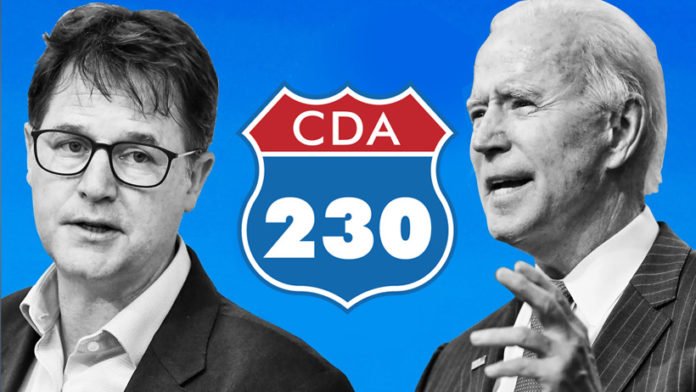 The so called »first Amendment of the Internet« is under attack. Regardless of who will take office of the Presidency of the United States in January 2021. Democrats and Republicans are attacking some of the pillars of a free and open internet. They want to make providers and platforms like Google and Facebook responsible for contents their users are publishing.

President Elect Joe Biden has said that he favors repealing the law known as Section 230, often called »The First Amendment of the Internet«. So far it basically shielded internet companies, search engines, portals, platforms, social media services and the likes from responsibility for their users’ actions.

Section 230 is part of the 1996 Communications Decency Act. It has been one key element to allowing free expression online by guaranteeing that even controversial content can be published without censorship. Something that basically also protects adult content of all kinds

Many Republicans in the Senate are trying to undermine that law for years to reign in on the internet and basically making one of Trump’s enemies pay for their perceived resistance to the Trump agenda: Big Tech and Social Media. Now though the press agency Reuters reports that similar plans are under consideration with the Democrats and the upcoming Biden administration.

One of the top tech advisors of the Biden team, Bruce Reed, is vocal opponent of Section 230. In his book »Which Side of History? How Technology Is Reshaping Democracy and Our Lives« he is attacking the free internet as being harmful to children.

These comments are at odds with Section 230 and basically say that the Internet as we know it should be fundamentally changed to »protect children«, the go to argument for everyone trying to censor media, free speech and especially: adult content.

Reed is not the only person in the Biden transition team critical of Section 230. Communication specialist Bill Russo, another top advisor in the Biden camp, is also a vocal critic of the law. And while Reed and Russo probably are mostly thinking about Fake News and Big Tech’s role in the spread of propaganda and harmful conspiracy theories they will open a door of seriously endangering the internet culture and especially the adult industry.