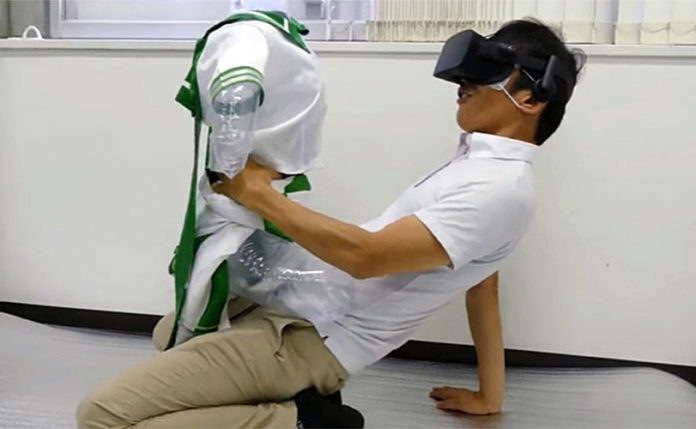 “It was unexpected. But it proved that many people have expectations for VR adult content” said Yoshida following his event, that saw a big crowd interested in VR adult content. “At that time, people didn’t really know what VR was… so I thought that adult content would be the most catchy topic to use to get people more familiarized with VR.”

“VR is the best way to satisfy their sexual needs,” he continued. “It will give us a new option in our sexual life. Getting a new option itself is great.”

The Japan Times, who hosted the interview, also wrote that “if people harbor a desire for abnormal or illicit sex, fulfilling that desire may be difficult or risky in real life, to say the least. But VR can make it all possible.”

“It can also help others who are too shy to express their feelings or start a relationship,” they continued, predicting that many personal fantasies would be possible within virtual reality in the near future.

In October, it was reported that sexual conversations with artificial intelligence, specifically virtual assistants, were on the rise.

“This happens because people are lonely and bored… It is a symptom of our society,” said Robin Labs chief executive Ilya Eckstein, who claims that his company’s virtual assistant “Robin” is used by “teenagers and truckers without girlfriends” for up to 300 conversations a day.

“As well as the people who want to talk dirty, there are men who want a deeper sort of relationship or companionship,” he continued, adding that some people wanted to talk “for no particular reason” and were just lonely or bored.

In an interview with Breitbart Tech about the future of sex with robots, futurologist Dr. Ian Pearson said “I think it will be fully emotional,” predicting that people will eventually spend “about the same as they do today on a decent family-size car.”

“Artificial intelligence is reaching human levels and also becoming emotional as well,” he continued. “So people will actually have quite strong emotional relationships with their own robots. In many cases that will develop into a sexual one because they’ll already think that the appearance of the robot matches their preference anyway, so if it looks nice and it has a superb personality too it’s inevitable that people will form very strong emotional bonds with their robots and in many cases that will lead to sex.”

Further mainstream interest in sex and relationships with robots and artificial intelligence has also been on the rise recently, with The Love and Sex with Robots Conference due to take place at London’s Goldsmiths University in December. A sex robot cafe has also been announced for London, which will allegedly sell drinks, “sex, pastries – and nothing more.”