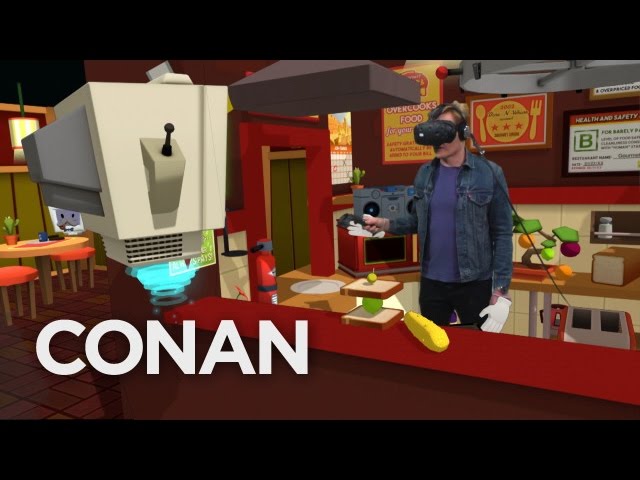 HTC had a pretty good PR moment this week as Conan donned a Vive VR headset on his show and got up to some antics during a tour of YouTube’s VR studio. After testing his artistic hand with a self portrait in Google’s Tilt Brush, Conan immersed himself in the world of Job Simulator and things got a bit crazy.

Owlchemy Labs‘ Job Simulator has been one of the more hilarious titles out there to show off virtual reality to users for the first time. HTC was well aware of this and bundled the title for all pre-orders of their Vive headset when it was released earlier this year.

Conan’s tour of YouTube’s VR studio accomplished what so many VR evangelists and tech journos have been unable to do, make VR seem accessible to the broader public that hasn’t tried it. A major help to this has been the pioneering effort of studios like Owlchemy Labs and Radial Games in creating the mixed reality capture tech that allows viewers to see exactly what the VR user is experiencing when they put on a headset. Even in the past several months the tech has improved greatly to the point that the VR user fades into the scene and can duck behind virtual objects even as the physical camera changes its perspective.

For as geeky as virtual reality looks to an outsider, these capture technologies give a bit of credence to just how cool the experiences really can be inside the headsets for high-end VR users.