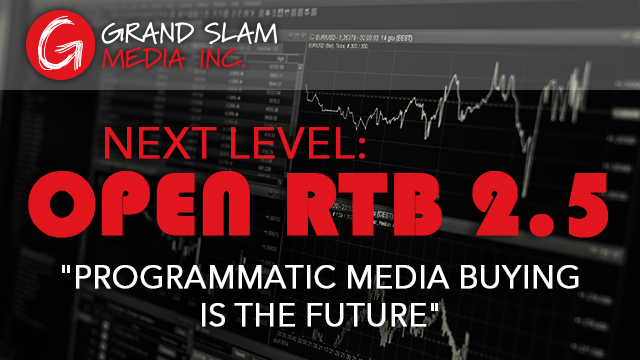 TORONTO – January 18, 2018 – Grand Slam Media, a global company that has been focusing on mobile and web traffic monetization since over a decade, announced their upgrade to “OpenRTB 2.5.” compatibility today. Introducing this improvement for its real-time bidding spectrum can add immensely to their latest stream of profitable offers and stellar technology enhancements. Since joining forces with TrafficPartner.com in early 2017, advertisers and publishers have seen a plethora of reasons to choose Grand Slam Media when it comes to maximizing web properties and ad campaigns.

“Real-time bidding has been an important part of our success story. With this next step, we’re offering another level of efficiency to companies that are looking for ways to effectively boost their return of investment,” Luke Hazlewood said, CEO Grand Slam Media. “I imagine, when taking a big enterprise to the next level, you want to do so in a data-driven fashion. That’s where we can offer our expertise and OpenRTB 2.5 compatibility, so you can aim for higher profitability, coming from potentially more effective campaigns, less divergence loss and a rather suitable market price range.”

RTB (Real-time bidding) is part of mainstream advertising on a daily basis. An automated and autonomous process puts every single ad impression up for bid in real-time. Thus the programmatic on-the-spot auctions are akin to a “stock market for ad impressions”. While the technology has been a part of Grand Slam Media’s success story, it’s become more and more popular in the adult industry as well. Accordingly, the company’s decision to be highly compatible with the OpenRTB 2.5 system is said to accommodate earlier versions and therefore effectively enhance the advantages of real-time bidding for advertisers and publishers.

Targeted advertising can be ensured, because each request has its own unique sets of requirements. “Of course only little human intervention is necessary, as decisions are dominantly data-driven,” Hazlewood continued. “Ads are delivered to consumers based on specific demographics, proper geo-locations and meaningful additional attributes. Optimizations going by sites or advertisers can define inappropriate supplies and demands just as well.”

“As a shareholder, I am thrilled about the new opportunities that OpenRTB 2.5 offers to both publishers and advertisers of Grand Slam Media,” Michael Reul, CEO of TrafficPartner.com said. “And as a publisher, who has its member area traffic managed by GSM, I know that it will be even easier and more lucrative for advertisers to buy just the right impressions for their offers. This goes for all geographical regions we are strong in like DACH, Nordics, AU, NZ and so on.”

As the end of the platform’s extensive and thorough beta phase is now at hand, Grand Slam Media is ready to maximize OpenRTB 2.5’s full potential for advertisers and publishers. “Come and join us,” Hazlewood said. “Make decisions based on data, because the future is programmatic media buying.”

Platforms for “demand-side” and “supply-side” should take note. Grand Slam Media states that DSPs have high chances to increase scalability of media buying efforts, profit from over one billion daily ad impressions and a rigorous approval process that ensures quality traffic.
SSPs may also see an advantage in separated adult and mainstream offers, as well as benefit by bigger traffic monetization through higher bidding competition.

You can contact Grand Slam Media at [email protected]