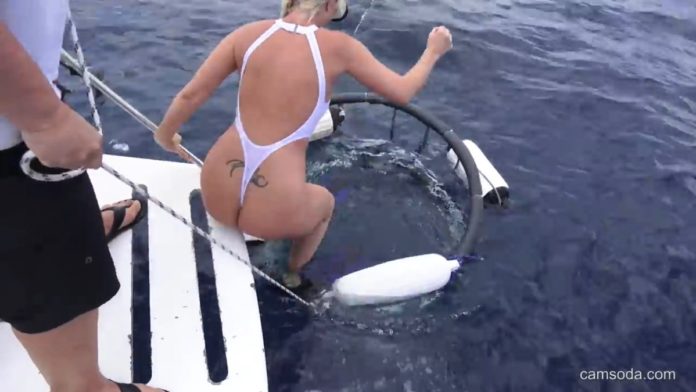 Weatherplus.blog.mypalmbeachpost.com Reports: “An adult film star faked a shark attack last week off the coast of Palm Beach County because she wanted a “viral” video, according to a respected Jupiter-based dive company.

Bryce Rohrer, owner and operator of Florida Shark Diving, said the actress and her film crew approached him two months ago saying they wanted to do a shark dive and fake a shark bite so that it would be widely viewed online.

Rohrer has a text message that the actress sent him with an image of what the bite would look like with special effects makeup.

“I was talking directly to Molly and she just said, hey, we are looking to do a shoot faking a shark bite and it’s strictly in order for it to go viral,” Rohrer said. “We immediately declined. We are pro-shark, pro-wildlife, and want to show the importance of sharks, not villainize them.”

But the film crew found another boat to take them out off of Palm Beach County and the resultant video did go viral, being viewed more than 14.3 million times on YouTube.

Neither the film company, nor the actress, responded Tuesday to attempts to contact them.

According to a news release from the adult-film company, the “shark-attack incident” required 20 stitches.

“I can tell you for a fact, it was not a shark bite,” Burgess said Tuesday about a slice in the actress’s foot allegedly wrought by a lemon shark. “How it was inflicted is conjectural, but the main thing is, the injury is not a shark bite. It was a PR stunt, and it worked.”

“It’s so bad for business, so bad for the image of sharks in general and makes shark diving look really bad,” Rohrer said.

To find out his thoughts on the alleged hoax, and why it’s important for shark bites to be recorded correctly, read the full story in The Palm Beach Post.