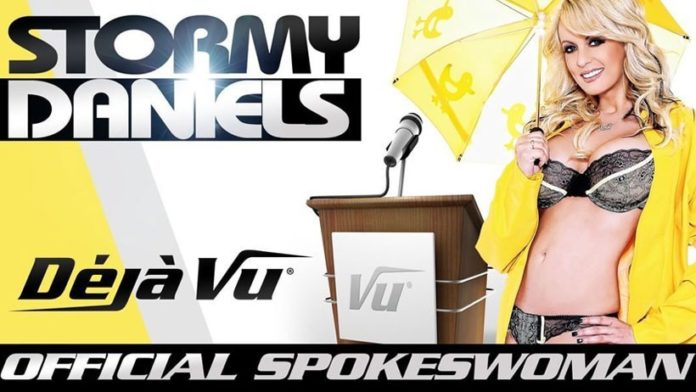 Stormy Daniels, this year’s featured guest at VENUS Berlin, recently signed a contract with strip club and sex shop operator Déjà Vu. The actress will be the new spokesperson for the chain, which operates some 200 clubs and sex shops worldwide.

The Las Vegas-based company with locations in Great Britain, Australia, France, Canada and Mexico explains the step with the worldwide »appeal, superb communication and lobbying skills, and extensive connections make her a perfect candidate for the position,« says Kristi Flores, a spokeswoman for Déjà Vu.

She adds: »Even though we’re already known worldwide as the unparalleled leader in live adult entertainment and adult retail stores, we feel that having Ms. Daniels as our official spokesperson will take our public relations efforts to new heights. With almost 200 clubs and stores internationally, we always have publicity and lobbying needs that affect the adult entertainment industry at large.«

One of the first issues Daniels will address will be legislation in Louisiana to raise the minimum age for women in adult entertainment to 21. Déjà Vu sees this as »discriminatory legislation being peddled by Louisiana legislators to further marginalize women in the state«. In addition, Daniels is to become active as a lobbyist in labor disputes in California.

Flores emphasizes: »We’re very excited to have Ms. Daniels join our team. Her involvement as a role model will promote a positive image of the adult entertainment industry and help fight the daily government intrusion we face from politicians looking to regulate our personal choices.«

If you would like to keep up to date with Stormy Daniel’s activities for Déjà Vu, click here. You can find information about the group of companies on the company’s website. This can be accessed via this link.

OFFICIAL ANNOUNCEMENT – We are partnering with Stormy Daniels to fight government tyranny! Read more at www.dejavu.com/stormy.