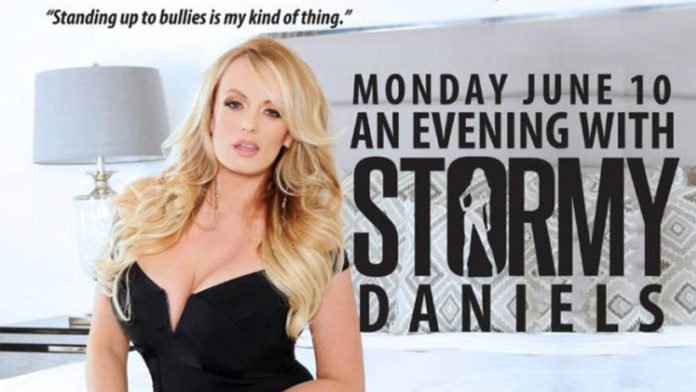 The event was called »An Evening with Stormy Daniels« and offered the audience plenty of opportunities to ask questions. In the end, there was the possibility to get the book of the actress signed. The rendezvous in front of 160 people cost the audience between 30 and 60 dollars and lasted about one hour. Stormy made an attempt as a stand-up comedian and joked with the audience about Canadians and shared rumors she had heard from strippers she knew.

Of course, the evening couldn’t have passed without side blows to Donald Trump, the current president of the United States, who many people regard as a mere billionaire enactor. Last year it became known that Trump had his ass spanked by Daniels and is apparently fond of dominant women. Daniels obviously enjoyed including this detail in her narrative about her own career: »I wrote, starred and directed because I’m a control freak. Ask Donald Trump.«

However, she doesn’t see herself as a victim. Under no circumstances does she want to be called a #Metoo victim. The affair with Trump was of her own free will. He wasn’t a customer, he didn’t cross any borders, she slept with him of her own free will. But it’s a fact that he and his team wanted to silence her in order not to jeopardize the 2016 election. And she stands by the truth.

New goals for the all-rounder

In the meantime, Daniels works as a speaker for the strip club chain Déjà-Vue. She is a campaigner for the rights of strippers and sex workers as well as for the right to abortion in the USA. The last question from the audience was about Stormy Daniels’ plans for the future. The questioner wanted to know whether Stormy sees a future for herself in politics. By now the former porn actress is media-savvy and quick-witted when asked unexpected questions. So she hurled at the questioner: »That’s way more of a dirty job than I already have — and they don’t test.«

Snuggling with fans and Trump critics

So the evening in Vancouver was funny and cheerful. After the event, Stormy Daniels was also available for one-on-one conversations with her fans and signed numerous pictures and books. So one thing seems certain: Stormy Daniels will continue to be a disruptive factor in Donald Trump’s presidency in the years to come. Even if the event should occur that he will be re-elected despite everything.