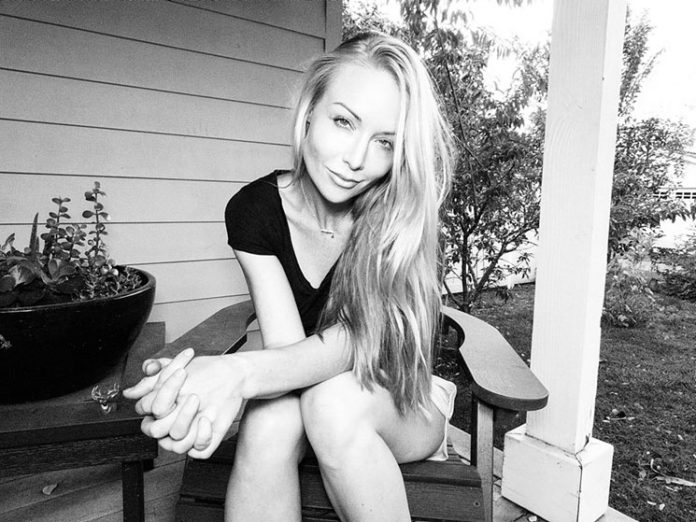 “My very first contract was with Vivid,” Kross says. No shoddy gonzo-style, one-dude-with-a-camera jittery scenes for this beauty: Kayden went straight from the proverbial Tinseltown-bound bus to the swanky Vivid Entertainment headquarters, still visible from the 101, across from Universal Studios.

“I was starstruck,” says Kross, who was handed over by the agent who discovered her to the care of Vivid’s Steven Hirsch, a Svengali known both for turning inexperienced starlets into glamorous “VividGirls™” and for getting adult talent into mainstream outlets such as Maxim magazine or Howard Stern’s radio show.

But Kross had an uneasy feeling. “I was conscious of changes in the industry,” she says. “Shortly after signing with Vivid I thought, ‘Oh, wait — very soon there’s not really gonna be Vivid Girls anymore!’”

A performer like Kayden Kross, with a solid decade of success in the adult Industry, cannot afford not to be thinking a couple of moves ahead to stay afloat in the changing business of porn. “After Vivid, I went to Adam & Eve for two years and then to Digital Playground for three,” Kross says. “For a successful girl, one who doesn’t burn out after the first few months, the really good year, your year, is the third year you’re in the industry. For me that was 2010, when I hosted the AVN Awards, got my Digital Playground contract — which was the best contract you could have at the time — and I really learned how to perform and to be comfortable having sex on camera.”

For Kross, the fundamental difference between a modern-day studio like Digital Playground and the Jenna-era Vivid is that now the performer is in charge of her own brand. “With social media, performers who are successful have so much control over their own presentation now,” she says. “In the past studios packaged them, and there were very limited opportunities to interact with their fans — just big conventions like AVN and some local shows. In the era of Savannah or Ginger Lynn, they had the image that the studio gave them. They pushed images that were spread on box covers and magazines as snippets of the images one could hope to see in the movies. The performers were nearly washed of personality completely before social media. If Savannah was upset with her studio, the fans didn’t know that.”

Fans nowadays are loyal to the performer, not to the studio. “In 2017 there are no more ‘Vivid Girls.’ You’re only a brand name if the fans make you a brand name,” Kross says. “As long as you put in the work, you can become a reputable brand.”

“The work” means constant social media engagement. Producers, much like the producers of other forms of entertainment, scrutinize a performer’s “numbers” before casting a scene.

“I spend eight hours online just putting the cast together for a movie,” says Kross, who recently finished editing new scenes for her visually adventurous “Sacrosanct” series (movies typically have four scenes). “I look at a girl’s social media engagement very carefully. You can’t lose money on a movie, you’re going with a sure bet. That’s why we use a lot of the same ‘established’ girls. With a brand-new girl you don’t know what to expect. Unless they have a no-B.S. agent like [Mark] Spiegler, who explains to them very carefully all the risks and rewards right off the bat. But Spiegler, unfortunately, is an exception.”

“The rates haven’t changed in 20 years,” Kross laughs. “Which means that with inflation and cost of living, performers are making much less than before. But since there’s less social stigma about entering the industry, the girls keep coming to L.A. trying to make it as soon as they turn 18.

For a few years now, the new girls turning 18 and coming into the industry are the first generation to have grown up with constant access to the tube sites online. “There’s definitely a faster learning curve,” Kross says. “The downside is that we’re not burning in the memory of the fans like the porn stars of the ’70s, ’80s and ’90s. Individually, we’re not as formative. Fans who related to Raylene or Seka are fans for life — a VHS tape was hard to come by. Now there’s so much — the turnover is so high. If you don’t get a fan base quickly and cultivate them through social media, you’re easily forgotten or easily replaced.«