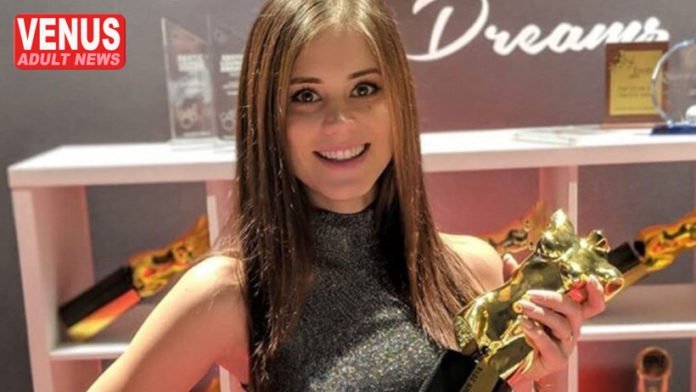 The freshly crowned winner of this year’s AVN Award as Best Foreign Performer has released two steamy hot scenes on her website LittleCaprice-Dreams. Nancy Ace and Liya Silver and Little Caprice’s husband Marcello Bravo join her in two of the most exciting movies of the year.

AVN Award Was A Lifelong Dream

Little Caprice is still overjoyed by her big win in January at the AVN Awards of this year. In a recent interview with AVN she said »I still can’t believe it happened! This was my dream for years to get an AVN Award and I’m super happy for it. Literally, there is not any higher accomplishment in this industry and I’m super proud for it. Thank you once more.«

The effects on Little Caprice’s career so far was phenomenal. She added: »Because I’m the only Czech actress who got this award there have been many articles in newspapers and online magazines and I’ve even done a couple of interviews. Everybody knows in my country and in German and Austrian news as well. So it brings a lot of attention, which is great!«

While it is certainly difficult this year to shoot new movies, Little Caprice and her husband and business partner Marcello Bravo managed to shoot and produce two high profile productions.
One of them was shot in the Austrian capital Vienna. Alongside Little Caprice the scene features the Nancy Ace, a Ukrainian blonde born in Kiev. Little Caprice said: »I feel this scene went great! We met with Nancy many times before, but never worked together until now! It was really awesome, as we had great chemistry and we both were very excited to finally touch each other. She is gorgeous, cute and has an amazing personality!«
The movie was shot in the winter before COVID-19 made it next to impossible to travel and make new movies. Little Caprice commented about the time before the shoot: »Before that, we visited the city, which in the winter is very romantic.«
The sexy scene is 30 minutes long and titled »Caprice Divas Nancy Ace Little Caprice – VIENNA«. It can be streamed on Little Caprice’s website.

On Little Caprice’s website the movie is advertised in the following way: »Little Caprice and Marcello Bravo are a wealthy married couple who live in a beautiful penthouse apartment in Vienna. Caprice is very busy with work, so she has a maid to help take care of her house. Marcello is currently unemployed and spends most of his time sitting around at home. But Caprice loves him anyway, and so when she chooses a maid, she always makes sure that she’s hot so her husband has some nice company while she’s out at work…«

The movie »Nassty The Incredible Maid« is 40 minutes long and available on LittleCaprice-Dreams.com.

The success of Marcello Bravo and Little Caprice is a beautiful story of combining extremely successful careers with a stable, modern relationship. Initially the two met in 2012 at the Venus BERLIN and both hit it off. While Little Caprice has been successful before they met the long-lasting success is probably also due to the love that bonds these two together in private and business life.

By now the couple is running LittleCaprice-Dreams.com, a hugely successful website where they shoot, direct and market their own content while also working for some of the top studios worldwide like Vixen.

On their own site they have 2,000 subscribers and work with talent from all over the world. In an interview Little Caprice recently hinted that she will soon sign a major deal with a well-known studio but didn’t disclose the name.  She said: »And for this one, I’m super happy, as it is really something new. I never work for them and I can’t wait to start our cooperation. … You will all know and see very soon.«

If you want to know more about the two and follow their productions just go to LittleCaprice-Dreams.com.