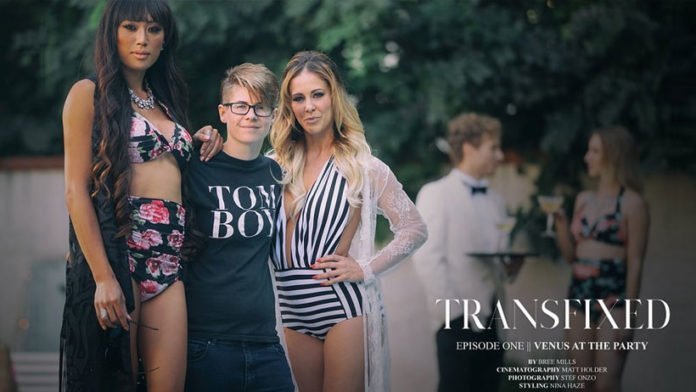 This year, three such series have been launched under the label Adult Time Original Series, for which Bree Mills is the executive producer, author, and director at the same time.

Others are better at fucking your wife: Of Bulls & Cucks and Hotwives

With Be The Cuck, Bree Mills ventures into the little-known world of cuckolding. The point of this fetish is that some partners find it exciting when they hardly ever or not at all have sex with their partner while the female lives promiscuously. A certain proximity to masochism permeates the idea of a husband who is intentionally »belittled and humiliated« in the fetish. The series is filmed in POV style and features porn stars Ashley Adams, Rachael Cavalli, Alexis Fawx, Katie Morgan, India Summer, Sarah Vandella and male stars such as Nathan Bronson, Charles Dera, Seth Gamble, Ricky Johnson, Jax Slayher, Sam Strong and Zachary Wild.

Bree Mills says, »This was our first venture into the world of immersive POV storytelling. We didn’t want to take the traditional route, so we studied how mainstream cinematographers are creating first-person films and then adapted many of those techniques into creating this adult series.«

Mills knows that Cuckolding has many followers living in the shadows, but that the fetish is generally unknown in the mainstream. »Cuckolding is a popular niche, but you rarely get to experience what it actually feels like to be a cuck,” added Mills. “We changed that.«

An Auteur Cinematography for Transgender Pornography: From Transparent to Transfixed

Transfixed features glamorous transgender pornography in the Indie meets Woody Allen aesthetic from the successful Amazon Prime series Transparent. This first league episode features a cast of the genre’s best-known performers, including stars such as Cherie DeVille and Venus Lux. The series is advertised with the slogan: A New Era in Transsexuality.

Bree Mills is enthusiastic about her project, of which only the pilot episode has been published on the website so far. She says: “The pilot was so powerful to shoot that I’ve decided to fast-track the edit and offer it for free to anyone who visits the Transfixed.com website. My intention is to showcase a new era in trans content, and inspire performers who wish to experience shooting a TS G/G scene together to have a beautiful, premium and empowering place to do so.«

The first episode is called »Venus at the Party« and is loosely based on the story of Cinderella. The scene takes place during a retro pool party and ends with beautiful fireplace action between Deville and Lux.

Like all scenes of the Adult Time series, the first episode of Transfixed was recorded in 4K Ultra HD. Gonzo perspectives are often used to create greater intimacy.

Mills points to the groundbreaking importance the project could have for transpornography: »There aren’t many mainstream adult sites right now that offer TS girl/girl scenes, especially in the style and tone we envisioned so I decided to create a series just for this; to offer the opportunity for Cherie and Venus and other performers to be themselves… together.«

The actual start of the series is scheduled for early 2019. The director invites performers who are interested to contact her.

More is always better: On the beauty of female abundance

In the body-positive series Shape of Beauty, everything revolves around full-bodied women with body shapes that have hardly been seen in the mainstream so far. Here, too, Bree Mills relies on an intense high-gloss aesthetic that is in no way inferior to that of great cinema films. The series is shot in Montreal and LA with two directors, one of whom is Bree Mills.

Some of the most beautiful women on earth are plus-size models, and they have been marginalized for far too long within our industry. I was extremely moved after directing last year’s ‘The Weight of Infidelity’ featurette with Karla, not only because of her beauty, sexual performance, and acting skills but because of the outpouring of support and interest from other curvy performers and their fans.

The Gamma Group’s Adult Time Network works with some of the biggest names in the industry. Pure Taboo, Rocco Siffredi, Girlsway and Vivid to name a few. In total, the group has more than 50,000 films in its network.

The three new Bree Mills series have their own websites, Twitter appearances, and membership models. Find out more about Gamma here.