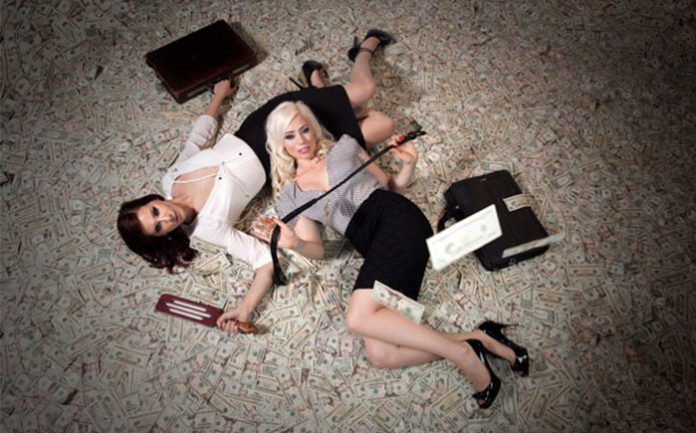 And that’s just the start of the story. Three years later, he has yet to claim his shows. He paid $84,000 for zero minutes of webcamming.

The thing that put you on my radar was that incredible record for the most expensive webcam session on record. Can you tell me how that came about?

Do you remember how much people paid back then?

I was charging $5.99 a minute, and I think my cut was 30 percent. At the time that was a lot of money to me, I was probably making $1,000, $1,200 a week. So it’s always been lucrative, but it’s also hard work. People think it’s just getting in front of the camera and smiling, but it’s not. You have to be a businessperson. You need to know how to market yourself. You need to know how to brand yourself. You need to know how to read people. The trick is to try to find out what their fetishes are as quickly as possible. Now I run the three websites for Kink: Hardcore Gangbang, TS Seduction, and Divine Bitches. I went to film school and was concentrating just on directing — and performing in a lot of the films that I directed for Kink.

I basically hadn’t done a cam show since 2009. When I talk about performers finding different revenue streams — I presented this to my boss as, “There’s so much more money to grab from these submissive men.” They want more than just a monthly membership at Divine Bitches. They want personal interaction with dominatrices, and with the internet that is possible. They want to buy used clothing off of you. They want to buy your garbage. I’ve had someone buy the contents of my garbage for $500 — literally just the garbage in my bedroom. And they want exclusive cam shows with famous performers and dominatrices. And I said, “We need to build a platform through Divine Bitches that offers these extra items.” Because the sky’s the limit.

We built a very simple infrastructure and promoted bidding for three weeks. A key part of the infrastructure is that customers can see their screen names and the amount everyone bids, in real time. They love the competition. Every one of these guys wants to prove that they have the bigger wad, so to speak. To see who is willing to spend the most money to have a private conversation with me.

It was such a large amount that we had to get in touch and have him wire-transfer the money. When the transfer came through, I sent him an email that said, “Let’s set up your show. Tell me a little bit about yourself, what you would like to do, what you would you like to see, would you like me to wear anything in particular?” And thanking him for being a part of this. And he says, “Yeah, you know, I’m really busy with work right now. But I think you’re an amazing performer and that you’re very beautiful. I’ll get back to you when I have time to do the show.” And that’s the last I heard from him!

Wait, he never claimed his show? Do you think he got off on just giving you money?

I also do financial domination, and there are clients where pressing that button — and transferring that money — is what’s getting them off. Giving money to their dom. Quite possibly that wire transfer was all he needed.

Did he claim that one?

No. It was the same exact thing: A few days later, the wire transfer came through and Lorelei got her money. They had one email. He thanked her for being wonderful and beautiful, and said, “I’ll get in touch with you.” Never heard from him again.

Did the price surprise you?

I didn’t think it was going to go that high. But it’s not so unusual to me. I’ve had clients who pay for financial domination — one guy wanted to call me, and I would berate him one minute and then hang up the phone. He would give me $1,000 a couple of times a week for one minute of yelling, “Your wife is going to find that you’re spending all this money on me!” There are men spending this kind of money on women — and, damn it, they should. They should be paying us for our time and our effort. So when you ask, “Are you shocked about the $42,000?” Well, I was. But I also spent the last 13 years branding myself, learning this art, and cultivating the character of Madeline. I earned it.

The clients that I work with are aware of what they’re doing. It’s this exchange of power between us that is a turn on for them and for me. [Crosstalk.] I’m sorry, my partner is trying to say something to me.

Oh, I wanted to ask about him, too! You’ve made films with your real-life partner, Will Havoc — that’s who you’re talking to, right?

Yes. We met on set, which is crazy to me. I hired him to be in a film with me, and he had never done porn before. He was about to start law school, and wanted to do something crazy and fun. He lived in the Bay Area and was familiar with the Armory and Kink.com. So he applied, and on a monthly basis I sort of scroll through the new applicants. And I find this gorgeous man on my screen, with a little write-up: He danced in the San Francisco Ballet, he’s going to go to law school, he’s gorgeous and hot and has tattoos and I was like, Oh my God.

So I hired him. As a dominant woman in Divine Bitches, we often deny penetrative sex. I’ll have them come back to shoot again and again, until they “earn” the right to enter my vagina. But this time I was like, “Holy shit, I am definitely going to fuck this guy. He’s so hot. I don’t care. I’m going to have a really good time on set today.” And when we get on set, and it’s just electric. We’re doing the scene — I’m tying him up and flogging him and whatnot — and I love men who take it in the ass, and he is a champion at that. So I strap it on, and I’m fucking him from behind when I just — like — put my hands on top of his hands. And interlock our fingers. I never do that. Never. To me, that’s really intimate. But I just I did it.

The whole time, it felt like the cameras weren’t there. But in my head I was also like: I like this guy so much, I actually am not going to let him fuck me, because I want to do it privately in my own home.

That’s so romantic. Do you ever have, like, boring sex?

Yes. All the time! We’re both really busy. The times when we explore our kinks, we kind of have to schedule as date nights. But, “Hey, we’re in the shower, let’s do this”? Absolutely. Don’t think we’re hanging from the rafters everyday. Work-life balance is a thing.«