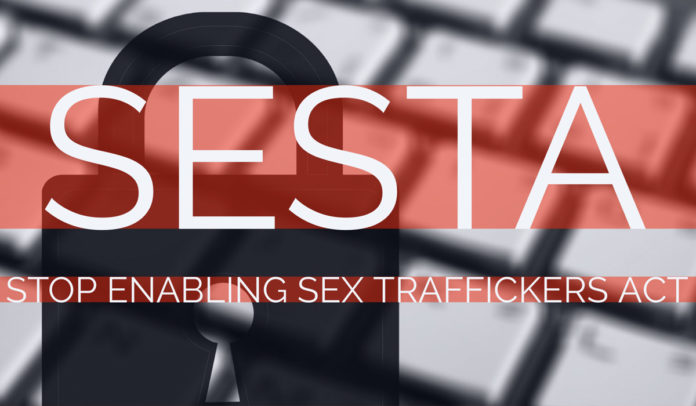 Several websites and services are currently closing their doors in the USA. A new anti-trafficking law undermines one of the cornerstones of legal security for adult products and offerings on the Internet. SESTA ends the almost total immunity for website operators and puts a lot of services in trouble. As a precaution, some of them give up altogether.

After Trump took office, there was already uncertainty in the US sex industry. That these fears are not taken out of thin air has since been demonstrated by many small steps that indicated that the Republican majority in both houses under Trump could take action against various areas of the sex industry.

On the surface the law is intended to clarify the laws against trafficking and make it a punishable offense for website operators to knowingly aiding, promoting and supporting sex trafficking. The Communications Decency Act also got a new section. Under the old terms of this law, online services could not be held liable under civil law for the actions of their users. The extension means that this immunity is waived at both federal and state level when enforcing laws against sex trafficking. All websites are now effectively responsible for the behavior of their users when it comes to sex trafficking.

The need for a new regulation seems undisputed, as websites such as Craigslist and Backpage have circumvented the US ban on prostitution through a very liberal personal ad section and at the same time opened the door to sex trafficking often involving minors.

However, there is also resistance to the erosion of immunity for website operators. Democratic Senator Ron Wyden says: »Federal law enforcement has failed to root out and prosecute traffickers, even when they’re operating in plain sight. So, too, have internet companies failed when it comes to sex traffickers operating on their platforms. The small, daring entrepreneur, civil rights associations, and small non-profits, on the other hand, have benefited considerably from immunity. Without this immunity, the Internet will be trimmed. It protects free speech; this is restricted when the law applies. And when the personals disappear from the pages, they go to the dark web.«

The senator fears unintended consequences of the law and suspects that it violates the constitution. He thinks that the law represents a major blow to what we call the open Internet. And in his opinion, there will be countless legal disputes flooding the courts.

The reactions of the industry were not long in coming. The Free Speech Coalition commented via its president, Eric Paul Leue: »Yesterday’s vote for SESTA/FOSTA in the US Senate is a dark day for sex worker rights. The bill, which seeks to stop trafficking by limiting how and where people can discuss sex work, will, paradoxically, encourage trafficking, abuse and exploitation by pushing consensual sex work underground. Over the past year, we’ve watched politicians, celebrities, pundits speak over, ignore, demean, dismiss and silence the voices of sex workers in pursuit of this bill. We’ve watched as so-called advocates willingly conflate the horrors of trafficking with consensual sex work. We’ve seen people question whether anyone can consent to sex work, and we’ve seen advertising platforms that work with law enforcement demonized or shut down for allowing any communication between providers.«

Numerous companies reacted immediately. Craigslist removed the personals from its website and published a statement: »Any tool or service can be misused,« says the company on its website. We can’t take such risk without jeopardizing all our other services, so we are regretfully taking craigslist personals offline. Hopefully we can bring them back some day.«

The notorious forum for discussions, Reddit, also decided to completely delete some forums known to be used by sex workers. These include the Forum/Escorts, r/MaleEscorts, and r/SugarDaddy.

The two well-known escort sites Nightshift.co and CityVibe.com have completely taken their pages off the net. In a statement Nightshift.co writes:

»We humbly welcome your support, and we hope to be able to offer you our services again in the future. Nightshift believes we can serve the community better by meeting in a safe place and providing a safe environment for meetings and contacts. Thank you for being part of our community.«

Furthermore, the only legal brothels of the USA in Nevada regard themselves as threatened in their very existence. Many sex workers are unsettled by the new SESTA regulation. Dennis Hof, who runs some of these brothels, says about the women working in his establishments: »They are already feeling the effects of SESTA. These laws will cause online traffic to collapse and result in a loss of revenue for them.«

The chairwoman of the ESPLER Project, a non-profit organization trying to decriminalize prostitution in the US, is extremely concerned about the law: »Well, we already know what happens next, there will be more arrests of prostitutes because the criminalization of prostitution is always the basis for these bad laws.«