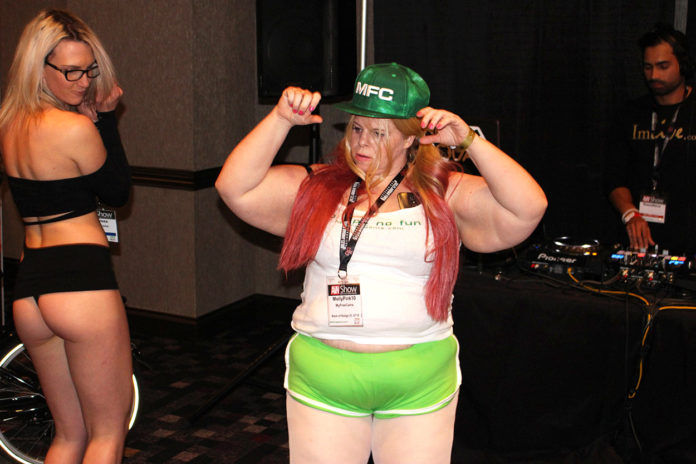 DENVER—Ginny Potter enjoys the freedom and control that comes with running her own cam room for a living.

“I like that it’s very empowering for women,” Potter says. “You do what you want. You set your own standards.”

The former bartender flourished when she got the chance to be her own boss as a model on MyFreeCams, where she’s been going strong for the past six years. On Friday she brought her popular show to the Crowne Plaza Denver Airport Convention Center, where she went live from the floor along with dozens of other girls at the inaugural edition of Exxxotica in the Mile High City.

“It’s so great that women can be free with their sexuality and do whatever they want,” Potter tells AVN. “It’s wonderful. I love being who I am and I’m not going to make excuses for it.”

The 26-year-old beauty, who was born in New York, raised in Florida and now lives in Seattle, says her favorite part of being a cam girl is “how I make people’s days.”

The traveling roadshow that is the MyFreeCams community once again set up it’s spacious, lounge-style booth front and center of the hall with a diverse group of models flirting, dancing and teasing members from all over the world, not to mention the energetic crowd that poured into the Crowne Plaza on “Ladies Free Friday” at the Expo.

With more than 200 girls RSVP’ed for the three-day event, this weekend will mark the biggest model turnout at any convention other than the AVN Adult Entertainment Expo in Las Vegas for MyFreeCams, which is the Presenting Sponsor of Exxxotica Denver.

That includes the traditional pre-show MFC Model Meet-Up, which packed in more than 80 models on Thursday night.

“It was a really small area so it made it seem like even more,” says friendly Arizona native Ginger Banks, who’ll reach her seven-year camiversary with MFC this June.

“I tried a couple other sites before and then when I got onto MyFreeCams I kind of stuck with them.”

Banks likes going to model meet-ups; she even has begun taking initiative to organize her own between shows.

“I’ve actually been trying to plan meet-ups all around the country with cam models and it’s really going well,” Banks says. “I did one in Texas and a bunch of the girls that I met there drove out here for the Expo, so we’re building little communities all over the country of cam models.

“So we did one in Texas and we did one in Arizona and they were both really successful. We traded lingerie and stuff because we always get wish-list gifts that don’t fit us.

“People always think you’re trying to be the center of attention when you’re talking about your job, so it’s nice to be around other girls that understand what you do.”

A former Arizona State University student who studied chemical engineering, the 26-year-old Banks “back in the day” did occasional cam shows in a law library on the Tempe, Ariz., campus.

“That library doesn’t exist anymore,” she notes. “I took those shows very seriously and made sure that anybody that didn’t consent wasn’t walking by behind me. So if you ever see anybody in the back of my library shows they were paid to be there.”

After Kendra Sunderland became a viral sensation in 2015 for her MFC cam session in the Oregon State University library, Banks says she changed her moniker.

“I used to call myself ‘The Library Girl,’” says Banks, who now resides in Connecticut. “I totally understand why [Kendra] would brand herself like that. I would have done the same thing, so I changed it to ‘The Original Library Girl.’ But I’m a huge fan of hers. … I kind of live vicariously through her.”

Wearing a 420-themed bodysuit with marijuana leafs in strategic places, Banks also points to the “good percentage” that MFC offers the models who cam on their platform.

“Since I’m a businesswoman that’s really important to me,” Banks says. “It blows my mind that some models work for sites that take up to 80 percent of their money.”

Indeed there were more than a few business-minded models turning heads at the impossible-to-miss, white-and-green MFC booth that featured a private backroom stocked with shelves of complimentary MFC goodies and a full spread of refreshments. Among the latest additions to MFC’s massive swag collection are umbrellas, gift-wrapping paper and yoga pants.

Annika Eve, in a striking red cocktail dress, tells AVN she does bikini and fitness modeling as well as some adult-oriented shoots, camming on the weekends for extra money while also running her own lingerie business.

Her Material Lingerie line, some of which she designs herself, features fetish-inspired fashions.

“A lot of it you can wear out, you can layer,” Eve tells AVN. “I didn’t wear any of it today, I probably should’ve. But I wanted to do a Hollywood look today.”

Born and raised in New York City and now based in LA, Eve says her cam shows are personal.

“I like to form actual friendships. It’s not all about the money to me actually,” Eve says. “I’ll play DJ, I’ll do song requests. I’ll dance around, get the mood going and make it a fun atmosphere. I usually log on when people are getting off work, too, so we’ll all kind of wind down together.”

The 23-year-old says she hopes to one day pose nude for Playboy.

“I don’t know if that will ever happen, but I did do Hustler. I really want to do Penthouse, too,” she adds, noting this weekend is her first Exxxotica show.

She brought fresh prints to sign and even some underwear in case fans want souvenirs.

Ivy Brooks, a 26-year-old, Asian-Latina spinner from LA whose been stripping since she was 19, started camming on MFC just three months ago but already has an armload of gear to hand out in Denver, including t-shirts with her likeness on it.

“I’ve been hearing about it for a long time. People would say, ‘You should be a cam girl,’ and I just kind of put it off,” Brooks admits. “MFC’s the top dog. They give the girls all this cool stuff and their site gets lots of traffic.”

Brooks, who now lives in Vegas, also has her real estate license in California. Now she cams every day.

“You have to be consistent,” she says.

Like any Exxxotica show, there were locals repping MFC like Selina Kyl, who walked the floor wearing her brand new, green MFC backpack. The 25-year-old native of Denver likes MFC because “they let you do your own thing.”

“I was doing hair and makeup before. I still kind of do but it’s really hard to get started in that,” Kyl says.

Now she splits time between camming and creating girl/girl videos for Clips4Sale. She passed out stickers promoting SelinaKylSucks.com, which she says “directs people to everything I do” as well as flyers.

It didn’t take long for Aviana Rose to make an impression on the MyFreeCams community upon her debut six months ago, vaulting into the top 95 within her first two months. Now she juggles camming with a full-time course load and she’s on track to graduate with her Bachelor’s Degree in Social Work this summer.

“I’m full time in college and it’s getting all my attention right now,” says the 20-year-old Rose, who is based in the Midwest. “I just got accepted for a Master’s program. I’m so excited.”

Rose came to Denver to see some of her members and go on a date with a raffle winner. Camming, she says, is “my life” outside of school.

Already armed with her Associate’s in Science and getting to closer to having one in Human Services this semester, Rose says she has some personal favorite MFC models.

“I love Harli [Lotts] and Stefanie Joy,” Rose reveals. “The girls are all so nice. It’s just a great community. They have tons of swag for us… They even have sweaters which is perfect because I’m always cold!”

Looking gorgeous in a pink lingerie ensemble, Rose says she already has her outfit planned for Saturday—a “bedazzled” creation that’s “all rhinestones.”

When she finishes her Master’s degree in Social Work Rose has a few ideas of what she’d like to accomplish.

“There’s so much on my mind right now… I want to open a rehabilitation center for people who have been through physical, mental and emotional abuse,” Rose says. “That’s really down the line what I want to do, like a private practice with counselors. I love helping people. It’s one of my big passions.”

Exxxotica will continue through Sunday at the Crowne Plaza. MyFreeCams will stay on the road too with upcoming stops at Exxxotica shows in Chicago (June) and New Jersey (November); and other trips in the works to Toronto for Everything to Do With Sex Show (October) and Australia for Sexpo (Perth in May), among others. MFC is also sponsoring the Suicide Girls Blackheart Burlesque Tour, which will next perform on April 13 in San Diego.