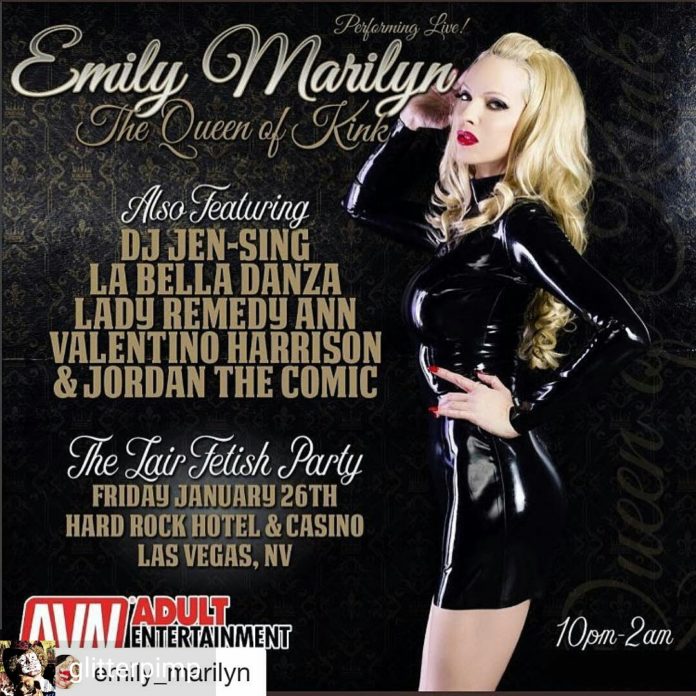 Vegas Baby! — Saturday morning at the Hard Rock Hotel and Casino has many preparing for the AVN Awards show, but the big winner is already Mistress Cyan’s Kinky Karaoke fetish party which was Friday night in the Festival room of the Hard Rock.

With award winning fetish supermodels Masuimi Max and Emily Marilyn performing, and the likes of Goddess Sativa, Cupcake Sinclair, and Mistress Irene Boss attending, it doesn’t  necessarily come as a big surprise there would be a big crowd. However, the  amazing part was just how many adult fans from the AVN Show came for the kinky karaoke.

“A lot of people here just need to goof off and relax a bit,” said Lady Remedy Ann Fetish of Sanctuary LAX and a guest at Kinky Karaoke. “At the end, we had at least three people singing while they were spanked and getting kinky.”

Maybe it was that fetish fans could take stage on their own for a moment. Could be it was getting to party with adult stars  without the hassle of arguing with a bouncer to get in. The multiple play stations for spanking, bondage and other kinky fun may have made it more appealing. But the combination of live fetish performances, fan interaction, and karaoke with a flare for the sexy and pervy packed the room. Which makes it most likely this event will be back next year as part of Lair at AVN.

About Lair at AVN