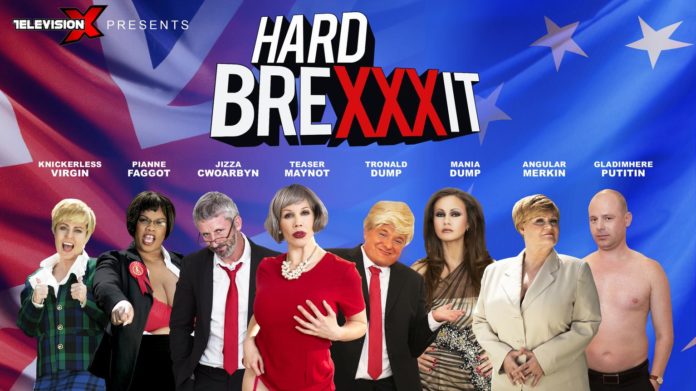 For legal reasons and probably because it’s funny, the names of our well-known world leaders have been changed. Starring Teaser Maynot (Rebecca More) from the Whorey Party, Jizza Cwoarbyn from the Laymore Party, Anguala Merkin, Tronald Dump and, of course, Gladimhere Putitin.

It probably doesn’t come as a surprise that the normally quite prudish politicians lose their clothes quickly. The joint press conference by Theresa May and Donald J. Trump therefore results in a glory hole scene.

Even German Chancellor Angela Merkel gets an interesting gig. For unknown reasons, she gets into some girl-on-girl action with a representative of Scotland’s party PNS. Definitely a must see. But beware: It might get in the way of your objectivity when you are reading again about foreign affairs.