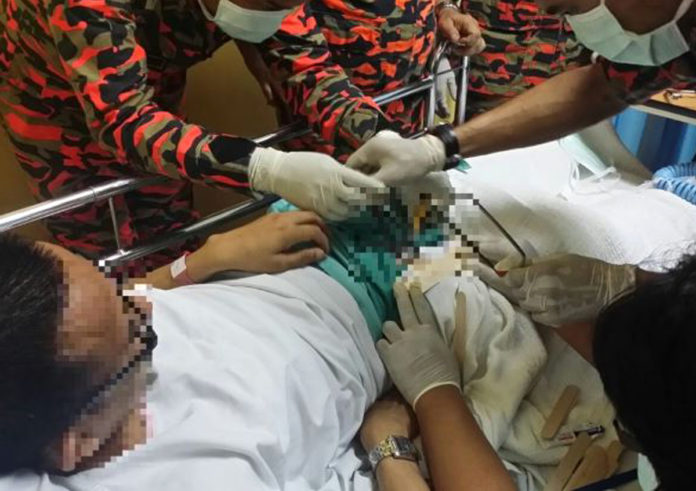 KUALA LUMPUR – Some 80 per cent of distress calls made to the City Fire and Rescue Department involving rings over the last three years were to remove rings stuck in the private parts of men.

City Fire and Rescue Department chief operations officer Samsol Maarif Saibani said that almost 80 per cent of calls made to the department to remove stuck rings were made by men after their genitals were stuck in the metal rings.

His warning against the sex toys came following the case on New Year’s Eve where the department was called to help a man in his 30s after his penis got stuck in a metal ring.

It took 12 rescuers from two fire stations, working from about 9pm on Friday till 2am on New Year’s Eve to free him after they were called in to help at the University Malaya Medical Centre here.

Mr Samsol said that the department received a total of eight cases to remove stuck rings in 2016 while there were 22 cases in 2015 and 10 cases in 2014, adding that most of the calls involving private parts and rings came from hospitals.

“Usually in a case like these, we would be called in to help because medical facilities do not have the tools required to remove a ring from private parts,” he said on Sunday (Jan 1).

He added that rings that were stuck on private parts were also more difficult to remove when compared to jewellery as these rings were usually made from dense metals, unlike jewellery.

Mr Samsol also urged people to be more careful with penis rings, especially those made from metal.