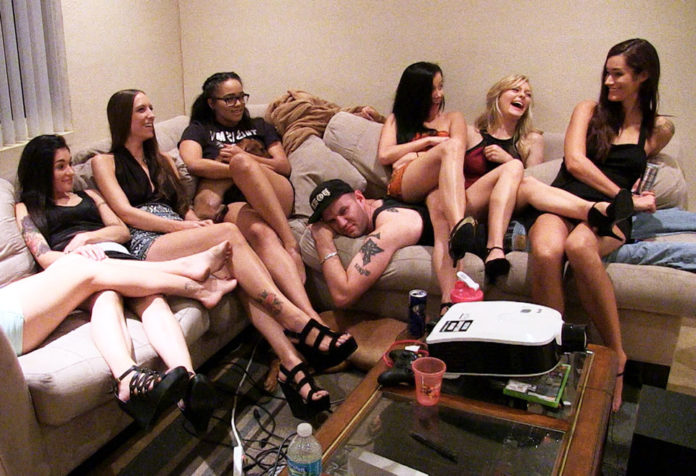 Paige says producers shouldn’t have included her real name in the series. She also claims that, after signing off on her consent to be filmed, she changed her mind when producers began asking her probing questions about her family. According to both Paige and Reynolds, they struck an agreement with the Hot Girls Wanted team whereby Reynolds would give producers permission to film more footage of his parents in exchange for cutting Paige from the episode.

Effy Elizabeth and Autumn Kay, who perform in a Periscope series together, say a short clip from one of their shoots was used in the sixth episode of Hot Girls Wanted without their permission or even a courtesy heads-up from producers. The duo found out they were shown in the series when a friend alerted them on Twitter. Elizabeth told Vocativ that her family is worried distant relatives may find out about her work by watching a readily available, highly promoted Netflix series. Prior to this release, her cam work was more difficult to find for anyone outside the smaller community of Periscope and Twitter users who make or view adult material.

Kay and Elizabeth’s videos were publicly available on the internet, and Vocativ reports that the consent form Paige signed grants producers the “irrevocable right to film, tape, photograph and record” Paige and use her “actual or fictitious names, voice, likeness and any biographical facts.” This means producers were likely within their legal rights when they published footage of Paige’s interview, broadcasted her legal first and middle names, and pulled a clip from Kay and Elizabeth’s performance. When Kay messaged Hot Girls Wanted on Twitter to protest their use of her image, the account’s manager allegedly offered to get someone to explain “fair use” to her.

But there’s a large gap between what’s legal and what’s ethical here. Documentary filmmakers should abide by the standards of journalistic work and strive to do no harm unless it serves a public good. The shots of Paige’s personal Facebook page and the inclusion of her real name don’t advance the story or serve any grand purpose in the episode. Her brief presence in the episode, which she claims she begged the producers to cut, is unimportant and doesn’t expose any kind of wrongdoing that might have justified keeping her in the series after she revoked her consent. The clip of Elizabeth and Kay is similarly insignificant—it is, somewhat ironically, part of a judge-y montage about how young people broadcast their selfies and sexual explorations all over the internet. The few seconds of tape could have easily been swapped out for a Periscope video of any other performer who wanted the extra publicity that would come from a Netflix appearance. Producers could have also considered blurring out the women’s faces or eyes, as they seem to have done in other clips.

Other people featured in the series say they were deliberately misled and told lies about the series: that the project was not related the original Hot Girls Wanted, a documentary widely panned by the porn industry, and that Rashida Jones, a producer of both the documentary and the series, was not involved. Reynolds is also protesting that producers showed part of his father’s face after agreeing to keep him out of the series. (The episode prefaces the segment with Reynolds’ father with a title card that says, “Riley’s father requested his identity remain hidden while filming,” then keeps about a third of his father’s face in view during parts of their conversation.)

The Free Speech Coalition, the adult entertainment industry’s trade association, has filed a letter asking Netflix and the Hot Girls Wanted: Turned On producers to “immediately pause the distribution of this series” to protect the sex workers in the film:

Privacy is a huge issue for performers, and in direct correlation to their personal and physical safety. Many performers face daily threats of harassment and violence from over-zealous fans and stalkers, and many are stigmatized for the work they do by families and communities. Paradoxically, this series may have made the lives of the workers featured in it substantially less safe by increasing the visibility and accessibility of their private information, such as birth names, and by broadcasting images without consent, and without regard to how that might affect these performers.

Producers Jill Bauer and Ronna Gradus told Variety that Paige never said she wanted to be excluded from the series. Gradus suggested that Kay and Elizabeth have caused more harm to themselves by tweeting about their appearance in the series than the series itself could have done. “They saw themselves, and then on Twitter, as themselves, using their own handles, tweeted out, ‘Oh my God, we’re on Netflix. Oh my God nobody told us. Oh my God, we’re sex workers and they’ve just shown us on Netflix.’ … We didn’t know who they were. We never would have known, the viewers never would have known, unless they themselves identified themselves,” Gradus said, noting that it was a “fair question” to consider whether Kay and Elizabeth were using claims of exploitation to amplify their public profiles.