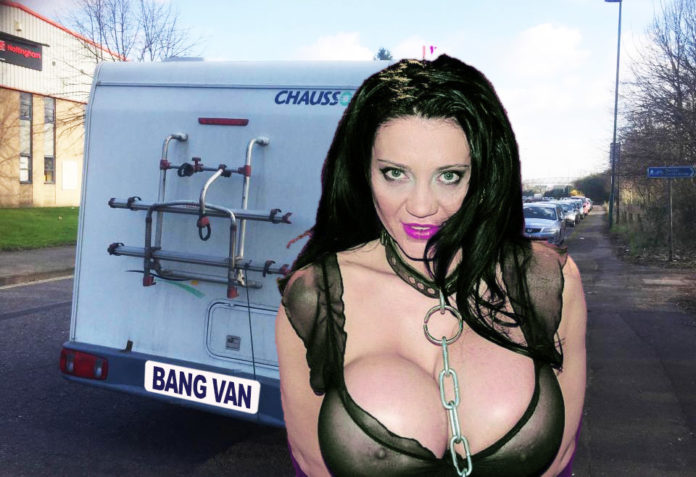 A sex worker is on a UK-wide tour of the country – and her next stop is the West Midlands.Kirie reportedly offers £50-a-time sessions inside her ‘pimped out motorhome’.

The vehicle, with a double bed, has been spotted in Nottingham and Middlesbrough over recent weeks.But the 34-year-old now says she is heading for Coventry, as well as Hull, Huddersfield and Chesterfield.

Kirie’s Adult work profile, which has been viewed more than 21 million times, shows plans to visit at least 22 further towns and cities during the rest of her tour.

On it, customers have left glowing reviews – praising her “lovely motorhome” and ability to hold a “great witty conversation.” However, on her escorting profile, Kirie claims her best asset is her “smile”.

It also features a “menu” of x-rated services starting from £30. Kirie sparked fury after parking her seedy motor home on double yellow lines in Nottingham earlier this week.

The complaints came just days after she was spotted in Middlesbrough. Concerned onlookers claimed punters queued in daylight outside a large VW camper van on Teeside, the Gazette reports.

“Just before lunch there were six guys looking at their phones as they stood outside the camper van,” said a nearby trader.

“It had been parked there since 10am. “I called the police but they said they were too busy. “It is disgusting and they have no shame as people have to work around here.”

And earlier this week, staff at the University of Nottingham became concerned after seeing the vehicle parked on DOUBLE YELLOWS – directly in front of the entrance to the King’s Meadow Campus.

One lecturer using the building said that the motorhome was ”rocking back and forth”, the Sun reports, with as many as THIRTY men queuing up in broad daylight.

Police confirmed officers were called over the alleged activity but told the caller there was nothing the force could do.

A spokesperson said due to it being advertised online, and inside a vehicle with blacked out windows, no laws had been broken.