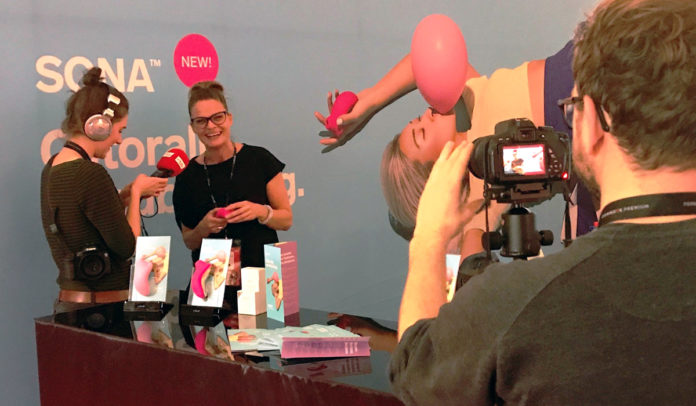 The biggest German sex fair, VENUS, thrives on its diversity. Exhibitors both large and small were once again present at this year’s fair. One of the giants in the industry is an international sex toy manufacturer from Sweden who also showcased its range of stylishly designed sex toys and innovative condoms at this year’s VENUS: LELO. In an interview with Svenja Schön, we talk about the history and organisation of the company, the scientific research on the clitoris, the new blockbuster product SONA the company’s experience at the VENUS 2017.

LELO and the UK-based Lovehoney have grown to become some of the world’s leading manufacturers of lifestyle sex-toys. Both manufacturers stand out with their unique design, glossy marketing, and clever PR.

LELO was founded in a Stockholm townhouse in 2003. At the beginning, there was a question: What if our most intimate items were just as beautifully crafted as the ones we proudly display?”This idea turned the humble and bashful industry into a 15 billion euro sector and lead to the Apple-ization of sex toy marketing. Thanks to the support of the news and entertainment media, and also due to changing attitudes, the industry has been able to grow rapidly over the past decade.

While Lovehoney is focused on licensing of huge brands like »Fifty Shades of Grey«, LELO banks its future on technological leadership, unique design and highly emotional brands like INA WAVE, TIANI, ORA, LILY or now SONA.  The self-proclaimed mission of the company is to produce » the most refined, most luxurious and most iconic objects of desire in the world.«

The company has operations in 50 countries and by now employs 2,000 people. Reason enough to talk to this giant in the industry. We met with Svenja Schön from LELO for a short conversation amidst the hustle and bustle of the trade fair.

VAN: LELO is one of the best-known companies in the industry, but little is known about how you work. Do you manufacture your own products? Or do you have them made?

Svenja Schön: We do everything ourselves. From development to production, from design to sales and marketing, everything at LELO is done in-house. This all happens completely at LELO. However, there are no stationary LELO shops. We distribute our products online via our website, but also through other dealers. In Germany, Amorelie and Media Markt are among our partners. Of course, we are also represented in some sex shops.

VAN: You seem to rely heavily on cooperations and strategic partnerships?

Svenja Schön: Yes, in Italy, for example, we have Dolce & Gabbana. We did something with DIESEL. We are always looking for partnerships in other industries.

VAN: LELO is an international company with numerous subsidiaries. But you are also a decidedly Swedish company.

Svenja Schön: Exactly, we still have our headquarters in Sweden. However, internationality is crucial for us. We have a strong foothold in Asia, the USA, and Europe.

VAN: Many sex toy manufacturers possess quite charismatic founding figures. Who is behind LELO?

Svenja Schön: The founders of LELO were two designers and an engineer. Interestingly, all men. Originally they were looking for beautiful toys for their girlfriends. 15,16 years ago they found these boring pink penises in the sex shops. There was nothing that they really liked. They then sat down and started to develop their own prototypes. From the very beginning, it was important to them that they were beautiful, high-quality and design-oriented.

VAN: The idea of well-thought-out designs for sex toys was very unusual at that time.

Svenja Schön: Yes, that was pioneering work back then. A lot of people have also told them: »Well, your stuff, it’s going to run for half a year now and then it was’ that.« It was not taken seriously. If you look around now, you’ll notice that a lot of people have picked it up. You can see that much of what is being done right now is going in our direction.

VAN: Where do your PR ideas originate from? LELO is one of the manufacturers that time and again succeeds in generating headlines in the mainstream media. Who is sitting behind these ideas thinking up studies that could be taken up by Men’s Health or VICE?

Svenja Schön: That comes from all our departments. We are a classic career changer industry. Nobody walks around and suddenly thinks at 16: »Oh, I want to sell sex toys.« It’s a bit of a funny expression in that area, but you kind of slide in. And because we are so internationally organized, many different perspectives and cultures in our company have their say. For PR that is very helpful. But this also provides new impulses for new toys.

VAN: An important source for PR work continues to be sex education. How do you approach it?

Svenja Schön: A good example is the clitoris. That’s a good example. People always think that we are all so enlightened and that the human body has been well researched for so long. However, it is true that not until 2005 did scientists deal with the clitoris and found out that all existing images of the clitoris were faulty. There were no details. It’s not just that small dot at the top, the organ is much, much bigger. It wasn’t until 2005 that this was properly tackled. In the process, detailed drawings were created. I mean, the penis was known in the Middle Ages. He was familiar, inside, outside, all clear. The clitoris remained mysterious.

VAN: Scientific findings are therefore heavily incorporated into your products.

Svenja Schön: Exactly. That was one of the reasons why SONA was born. Because the clitoris is not only the small dot but a much larger organ. SONA has just come onto the market. Many people see it and say it’s like the WOMANIZER. Looks similar, but the technique in there is a different one.

VAN: What is the difference between WOMANIZER and SONA?

Svenja Schön: The Womanizer works with suction. And SONA works by vibration, sound waves, and pulses. You can feel a breeze. It’s basically like during sex when the man breathes through his nose while licking. The device has 8 modes and is waterproof like all LELO-Toys.

VAN: You are all clearly tech-nerds, your development team has developed a second model. It is called SONA Cruise. What is so special about it?

Svenja Schön: On the surface, the Cruise looks exactly the same. But the device has a different technology on the inside. This is where the Cruise sensor technology is located. If you press a toy firmly against the body for a long time, then it is possible that the vibrations will become weaker or more unstable. The Cruise-Technology ensures that 20% of the power is always held back during normal operation and at the moment it is pressed firmly and for a longer period of time on the body, this 20 % is automatically activated.

VAN: Your development team is based in Stockholm and partly in Shanghai. But where are your toys made?

Svenja Schön: We are manufacturing in China. However, we don’t work with third-party manufacturers. These are all LELO people.

VAN: Which trends do you see? You’re not offering any interconnected devices or app-based toys.

Svenja Schön: Yes, that’s right. We do not offer app-controlled sex toys. We believe that one of the big future trends will be men’s toys. There is a lot out there for women, and we are now seeing the trend towards more toys for men. Of course, digitization will affect industries and ours as well, but we have not planned anything concerning app-controlled toys. We do have a sister brand, that’s PICOBONG. There we offer app-controlled toys because people are asking for them and it’s fun. With this brand, we are targeting a younger, more price-conscious audience.

VAN: How many times have you been to the VENUS?

Svenja Schön: Three times. For me, it’s my first time at the VENUS. For the last six years we have been at the Erofame, but this year we thought that it’s time to be at the VENUS again.

Svenja Schön: Yes, exactly. I saw pictures of the VENUS beforehand, but I was pleasantly surprised that there is this area here and the audience is very different and curious. They are pleasant people, polite, very interested. Of course, there are also bizarre people walking by, but I find that very interesting here.

VAN: What target group do you want to reach when you appear on the VENUS?

Svenja Schön: Everyone of course. End customers are important, the feedback from real users. But there are also dealers and partnerships that arise. The VENUS is particularly interesting because it is here that you get in touch with the end customers.

VAN: Thank you for talking to me.