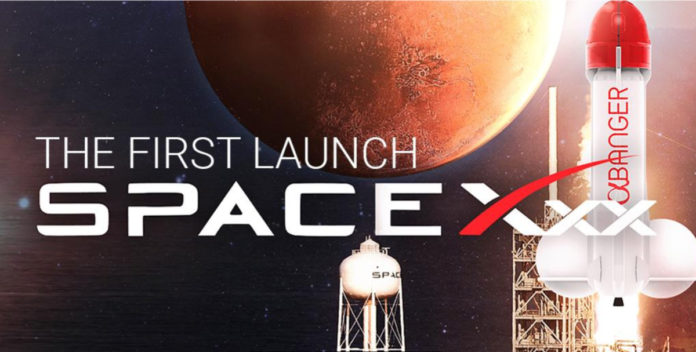 A few months ago, in February, and seven years after Elon Musk announced that SpaceX was going to produce the most powerful rocket in the world, Falcon Heavy took off into space with the hybrid car Tesla Roadster onboard. The two propulsion boosters returned to Earth, and the car was heading towards the Martian orbit, supposedly reaching it in a few months, according to the original plan. The latest information provided by the company declare a different course of events, because due to the favorable conditions in the Earth’s orbit and the possibility of the Falcon Heavy rocket accelerating to a higher speed, the vessel arrived today!

The Falcon Heavy rocket development program was announced publicly by Elon Musk – founder and director of SpaceX, in April 2011. The first start was announced for 2013, however, the date was postponed many times, which was caused by both a lack of initial interest in this rocket from potential commercial customers, and the company’s focus on achieving the recovery of Falcon 9, modernization of the Merlin 1 engine and to work on the manned version of the Dragon 2 ship first.

The whole undertaking consumed tens of millions of dollars and there were many skeptics who were afraid that it would fail, but present day has brought some great and unexpected news – Tesla Roadster from SpaceX arrived at the red planet! Even though it was supposed to reach its destination a few months from now, the rocket was capable of accelerating to 160% of the planned thrust, thus giving the cargo (the car) greatly increased momentum and making it fly towards Mars faster than expected.

Since the undertaking was being streamed online for everyone interested, SpaceX also provided a recording of material recorded after landing. The following footage is available online, yet it may be shocking for the majority of the interested, thus we recommend special caution while watching it. It turns out that SpaceX mission was not the first to conquer the red planet, and as soon as the astronaut left his vessel to make the first steps on Mars, a shocking picture appeared to his eyes, and the transmission was immediately interrupted.

A few days ago, VR Bangers, one of the first adult entertainment sites in the world to produce virtual reality adult movies in full 360 degrees, announced formally that their newest initiative, named SpaceXXX, has been officially launched, making them join the race for the planet Mars. VR Bangers’ space shuttle called αBANGER 69 has been successfully launched, starting the great competition between these two companies in the fight for fame, respect and defloration of the virgin red planet.
Hours after the αBANGER 69 launch, footage of the universe visible from the Tesla Roadster’s perspective showed us that the VR Bangers’ vessel was actually capable of exceeding the Falcon Heavy’s thrust, and the mannequin heading into the planet’s direction outraced the SpaceX shuttle on its way to Mars. However, it was not certain whether the VR Bangers’ rocket reached its destination, and did not crash on the surface of the planet – until now.

To learn more about the VR Bangers SpaceXXX mission and watch the aforementioned footage, visit https://vrbangers.com/spacexxx