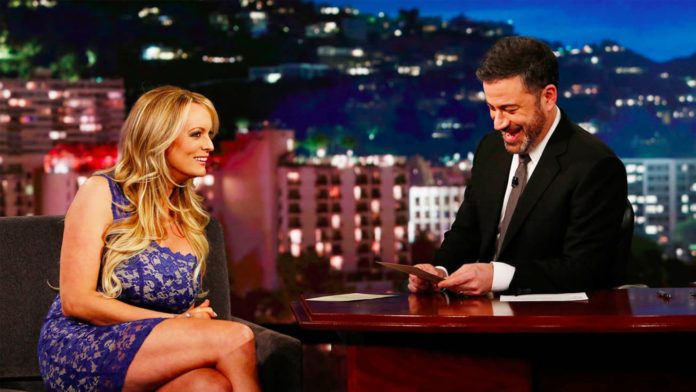 Stormy Daniels and her legal team are currently trying to find a way to get out of her confidentiality agreement with Trump’s lawyer so she can openly talk about the alleged affair between the porn star and the current president of the United States. The legal language used in an offer to repay the »hush money« hints at the possibility that Daniels might be in possession of pictures or videos proving the affair with Trump.
In a suit filed last week porn star, Stormy Daniels tries to have the confidentiality agreement to be declared void. Her lawyers argue that the fact the Trump’s lawyer Michael Cohen publicly talked about the agreement made effectively ended Daniels’ contractual obligation to keep quiet. In another line of arguing her legal team claims that the contract is void because Trump never signed the agreement himself. And in a move to remain in the news while also adding pressure to Trump’s PR team Daniels now offers to repay the $130,000 she received in order to never talk about her affair with Trump.
Her main goal is to talk publicly about her alleged affair without the risk of getting sued by the President or his lawyer. This is especially important to her as she obviously already talked to CBS’ »60 Minutes« during an interview taped last week. If the agreement is not declared void she might get into serious trouble if the segment gets aired as planned on March 18.
Trump himself has not yet commented directly on any of Daniels’ claims but his press secretary Sarah Huckabee Sanders said that Trump »made very well clear that none of these allegations are true.«

The offer by Daniels to repay the hush money includes interesting language. She seeks to be able to »(a) speak openly and freely about her prior relationship with the President and the attempts to silence her; and (b) use any/publish any text messages, photos and/or videos relating to the President that she may have in her possession, all without fear of retribution and legal liability for damages.«

Trump’s legal team is busy fighting all of it. Primarily they are trying to stop the 60 Minutes interview. According to the New York Times though CBS itself did not get contacted by the president’s lawyers. And it remains to be seen if the actress would really get sued because to sue Daniels on the ground of breaching the contract would be an admission on Trump’s part that the confidentiality agreement and the hush money and hence the affair itself did take place.

One thing is sure. It won’t be the last news item on this particular subject.