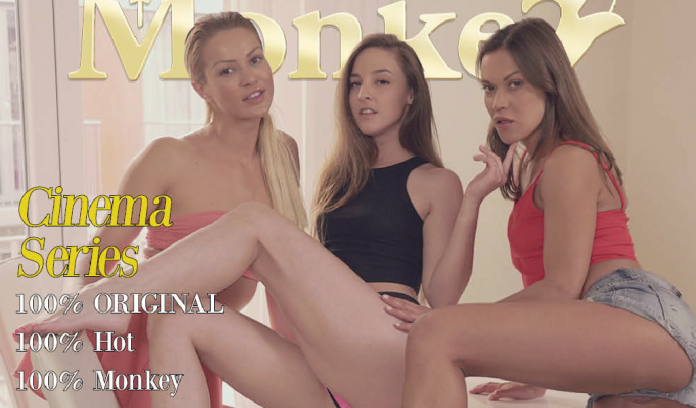 Cherry Kiss is ready to involve you in her first comedy movie for Benefit Monkey. The film “This is Budapest: The Movie!” includes two hours of glamour sex lesbian scenes starring Amirah Adara, Alyssa Reece and Alya Stark.

“Was a great experience working with Cherry again!” said a spokesperson of the art collective. “Our scenes together were loved by our audience. This is just the first step of a new long collaboration with Cherry for feature-length movies.”

The film is already online, and it’s the first Benefit Monkey’s feature film. It is an 80s style romantic comedy shot in Budapest. It shows the sex adventure of a young queer couple in the city.

More than 45 scenes are now available online featuring Cherry Kiss, Alyssa Reece, Veronica Leal, Anastasia Brokelyn, Amirah Adara and many other stars. More than 20 scenes are now in post-production, and they star big names of the industry such Angelika Grays, Alexis Crystal, Katy Rose, Rebecca Volpetti and all the monkeys.

Thebenefitmonkey.com offers a full access membership for just 19.99$ for the first month of subscription!

Thebenefitmonkey.com is the first part of a bigger project planned by a Swiss art collective named A. Monkey. They keep an eye on art and an eye on lust.

The scenes and the films by Benefit Monkey are available online on Thebenefitmonkey.com and AdultEmpire.com (https://www.adultempire.com/96182/studio/benefit-monkey-studios.html)

Created in late 2019 by the art collective A.Monkey – a talented group of artists and film professionals based in Switzerland – the website benefitmonkey.com was launched in May 2020 with an eye-popping collection of original 4K Ultra HD premium quality all-girl content that’s updated weekly, starring adult’s most popular and exquisite performers.

“We keep it real! We involve all of our performers in the creation of every scene from the very beginning, and give them complete freedom on set in order to enjoy every moment without ‘fake acting,” says a company representative. “We make films that everyone can enjoy, with storylines that evoke emotions and make audiences feel like they’re a part of the action as well.”