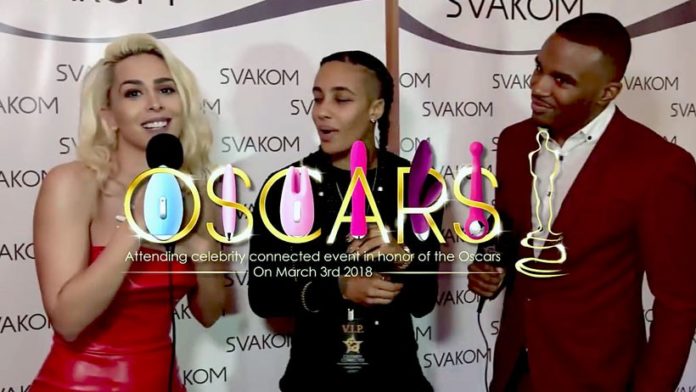 Since its foundation in 2012, Svakom has been one of the trendiest, cheekiest sex toy producers in the USA. In addition to technically innovative products, the company’s focus is on the elegant and daring design of its products, all of which can be found in the premium segment. Among the awards the company has received are the prestigious RED DOT Award and the IF Award. SIGN Magazine presented Svakom with an award in the category »Best Toy Technology 2015«.

As a luxury manufacturer with surprising products such as vibrators with built-in cameras and self-heating massage sticks, the company was able to establish itself worldwide in the mainstream. Representatives of Svakom were invited to the »Honoring the Oscars« broadcasts of Celebrity Connected this year and last year.

The company sells its products in over 70 countries and, according to its own figures, is one of the fastest growing companies in the sex toy industry.

The Svakom team will have felt at home in Berlin like Moscow, after all, the manufacturer has been attending the fairs for years. In Moscow, it was already the ninth year that the Americans’ sex toys were showcased at the Russian adult fair.

A representative of the company says: »Pink Rabbit is one of the biggest chain store brands in Russia, which has over 60 stores in the country. Astkol is one of the distributors of Svakom in Russia. Svakom also launched the new products Nymph, Ella and Tammy. It was the first time for these three new products to show their faces in Russia. Nymph was the most popular one, winning people over with its innovative design, as well as amazement by the strong vibration that Nymph makes. Ella and Tammy have also had a great success. They’re both like the upgraded version of our previous hot sales products Elva and Tyler. It is not surprising that everyone loves them.«

Overall, the manufacturer is celebrating the trade fair season as a success and will probably continue to launch its products at trade fairs and industry events in the coming years.

The bustling company is also known for conducting street surveys on sex toys.