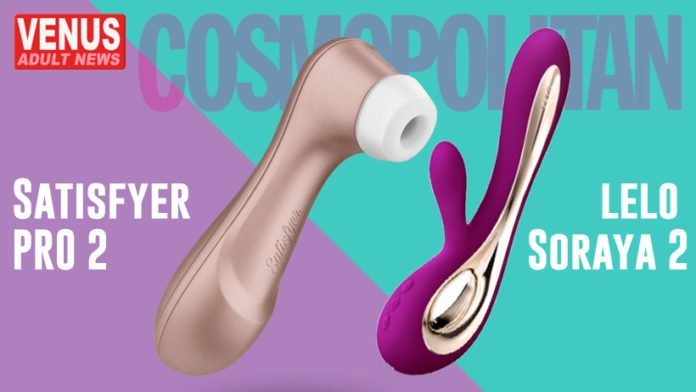 The US edition of the glossy magazine Cosmopolitan asked retailers and some manufacturers about their best-selling Toys 2020. The two VENUS exhibitors Satisfyer and Lelo scored particularly well.

This year Cosmopolitan again asked several retailers and manufacturers which toys are selling best this year. The Swedish company LELO and the Bielefeld-based Satisfyer Group are among the most frequently named manufacturers on these lists.

At LELO, the clitoral stimulator SONA 2 and the rabbit toy Soraya 2 are the most frequently ordered toys. But also the F1, a premium stroker for men, enjoys high sales figures.

About the Soraya 2, the magazine writes: »It might not look like your average Rabbit vibe, but the Soraya 2 is actually designed with the same internal and external clitoral stimulation in mind. It’s like a Rabbit if it became an art piece. The sleek gold detailing and ergonomic loop means you can get it on without hand cramps. It’s USB rechargeable, waterproof, and has 12 settings.«

At Babeland, the Satisfyer Pro 2 sold particularly well. Cosmopolitan writes: »The Satisfyer Pro 2 uses suction (feels kinda similar to the Lelo Sona) but is way cheaper, albeit not as cute. Where the Lelo Sona is all Silicone with gold detailing, the Satisfyer is mostly plastic, with only silicone on the opening for your clit. That being said, it’s a damn good price, and a pretty good product too. If you don’t like the squat shape of the Lelo Sona, the curved handle of the Satisfyer might be better for you as well.«

Cosmopolitan writes about the penguin-shaped toy: »The first line of Satisfyer toys all had this nubby little base, and none of them were cuter than the Satisfyer Pro Penguin, which was yeah, designed to look like a penguin wearing a bow tie. I hope they never run out of these cute Pro Penguins because that was an ERA. P.S. This one’s also USB rechargeable!«

For more information about LELO, click here. The Satisfyer website can be accessed via this link. For the complete Cosmopolitan article with the best selling products in the USA, click here.