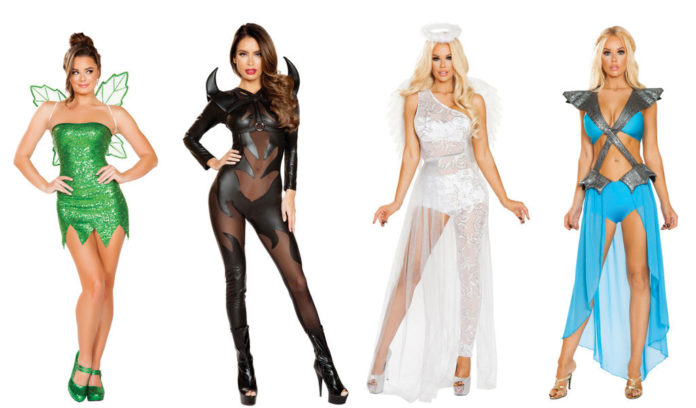 AVN reports “This Halloween, adult retailers are thinking up creative ways to get customers into their stores. While online retailers are offering free shipping and discount codes, brick-and-mortar stores are trying new techniques to get new customers to buy their sexy Halloween get-ups in-store. The good news: women (and men) continue to use Halloween as an excuse to parade around town dressed as a slut, without being slut-shamed.

Roma Costumes—a wholesaler of club wear, costumes, lingerie, and “sexy outfits”—sells to 15,623 retailers, including e-tailers and retail stores. The company has been in business for 25 years, supplying naughty costumes to customers who know that the best night of the year to get laid is Halloween.

This year their two most popular styles (they have hundreds) celebrate the “sexy good girl” and “sexy bad girl.” According to General Manager Sahand Fard, the company’s most popular costume for women is “Heavenly Angel,” a sheer white bodysuit with halo and white wings.

The second most popular is the “Seductive Devil” number, a black sheer bodysuit with sexy cut-outs. Trend wise, Fard says, “Wonder Woman has had an effect on this year’s warrior and superhero costumes for women. And Game of Thrones had a large effect.”

They also make men’s costumes, which are either “Villains” or “Vigilantes” and involve a cape, a helmet, or sexy tights. Viking outfits are big this year for anyone who wants to go as a sexy Swede.

The Psychology of Dressing Up

From a psychological standpoint, women’s choice of costumes this year suggest they want to have fun with fantasy costumes (fairies and mermaids are back in), be worshipped as a goddess (Greek goddess costumes are big this year), or feel empowered with a superhero costume and kick the ass of the obnoxious drunk guy at the Halloween party dressed as a huge dick.

To learn more about LaRue’s store, visit ChiChiLaRues.com. For details on the parade, click here.

Those who are looking to hit Hollywood Boulevard instead of the WeHo extravaganza can check out another local tradition: All Play Media’s long-running Heaven & Hell costume party, which will be held Friday, October 27, 2017 at 9 p.m. in three different clubs—Project, Study and Beatle House—at 6356 Hollywood Boulevard, Los Angeles. For tickets and tables, visit Halloween-LA.com or email  [email protected]

Down at the Hustler Hollywood store in New Orleans, Louisiana, “Halloween is every night of the year” says assistant store manager Jeremy Kates. According to Kates, this year’s Halloween trend is the “DIY/Do It Yourself costume.” The store saw the trend happening last year and realized that “people want to customize their costumes so they don’t go out and see someone else with the same costume.” So the store offers props, wigs and accessories for people to make costumes their own.

NYC Is Going to the Dogs

Each year, NYC holds the most fabulous, massive, pulsating Halloween parade in the country, with marching bands, STOMP and giant floats. Ricky’s NYC told us that people prepare for the Greenwich Village Halloween Parade for months beforehand. They specialize in theatrical make-up along with their costumes and each year do pop-up stores in Manhattan, Brooklyn or Queens.

But this Halloween, costumes have gone to the dogs. Another parade has created a new trend: people dressing up in matching sexy owner/doggie style. The annual Tompkins Square Halloween Dog Parade on October 22 in NYC is the “largest dog costume parade in the world.” Where else can you see sexy bulldogs doing runway?

The “Marilyn Monroe” costume complete with canine cleavage was sold out months in advance from HalloweenCostumes.com. The “Naughty Maid” outfit from SpoiledRottenDoggies.com comes with a matching French Maid outfit for your “naughty” doggie. Since costumes stores tell us that most of their ready-made doggie costumes are already sold out, you can always make your own. (Or get some doggie/people costumes going for XXXmas.)

“People are coming in asking for sexy cop outfits and sexy schoolgirl outfits, because those are easy to make do-it-yourself versions for your dog,” a salesperson at a Ricky’s store in Manhattan told us. “And last year Ricky’s did a temporary “pup up store,” which was so successful I think they should do it again,” she noted.

Dressing up your dog will probably get more attention then you will.

Pictured above, a few of Roma’s most popular fantasies: a Game of Thrones-inspired get-up called Mother of Dragons, the Angel ensemble (Roma’s top seller), the Evil Devil (just behind the Angel in popularity) and the Fairy costume.“”