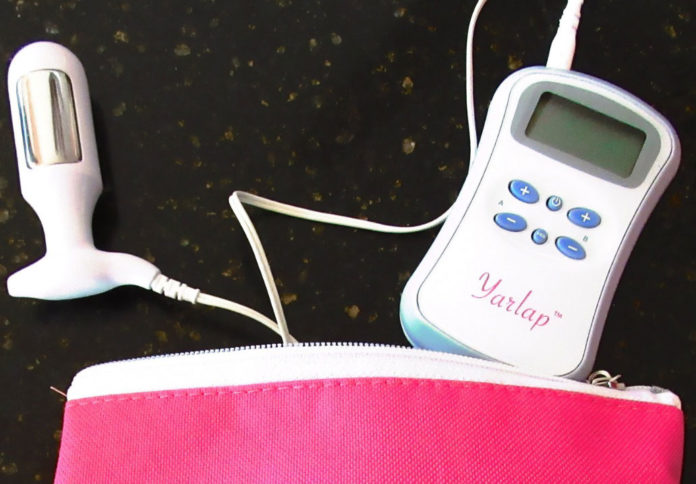 Nick Gillespie: “When Brent Reider, a 58-year-old medical-device inventor from Oxford, Ohio, set out to develop a fix for the suprisingly widespread problem of female urinary incontinence, one of the last things on his mind was building a better orgasm. He was just trying to use a neuromuscular electrical stimulator (NMES) device to strenghten women’s pelvic floor muscles so that they could better control their bodies in the face of changes wrought by aging, childbirth, and other life experiences.

Yet by the time he brought his newest contraption, the Yarlap, to market last year, he’d discovered something that only a very few (and almost always female) researchers had ever seriously thought about: A woman’s pelvic floor is almost unfathomably complicated, designed by evolution to control and influence all sorts of bodily functions from bladder control to posture to sexual functioning. The pelvic floor’s health and strength affects not just obvious parts of a woman’s anatomy but also her lower back, hips, and knees. As important, Reider found that his device, which uses low-level electrtical stimulation to strengthen the pelvic floor muscles, not only helps cure incontinence but often heightens a woman’s ability for sexual satisfaction in a way that the most-dedicated Kegel practitioner could only dream about. Reider’s findings, which draw on work by academic researchers such as Beverly Whipple and Elisabeth Lloyd, has been published in The Journal of Women’s Health, Issues and Care, and crosses boundaries between sex and medicine that are rarely acknowledged, let alone traversed.

Unsurprinsingly, then, when it came time to start certifying the device through the Food and Drug Administration (which has been tasked with “clearing” medical devices for safety and efficacy since the 1970s) and marketing it through sites such as Amazon and Facebook, Reider and his business partner, his 24-year-old daughter MaryEllen, ran into a different but equally knotty set of issues. It turns out that neither the government nor social media are quite ready for a medical device that transcends the traditionally separate categories of sex and medicine.

In the latest Reason podcast, I talk with the entrepreneurs about the difficulties in launching a device that not only promises to help the one-in-three women (including many high-performance female athletes) who experience incontinence but also reconfigures the way we think about personal health and well-being. The Yarlap, says MaryEllen Reider, can be bought without a prescription and is an example of a medical technology that’s “about improving your lives and taking your health into your own hands.” As such, it joins a growing roster of “electroceuticals” and other devices, drugs, and techniques that empower individuals to improve their lives in very specific and personalized ways.”

Subscribe, rate, and review the Reason Podcast at iTunes