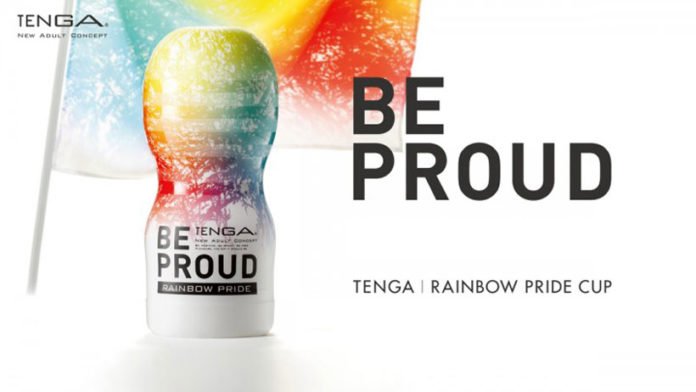 The Japanese sex toy producer Tenga, based in Tokyo, has announced that it will launch a rainbow-colored single-use masturbator worldwide on the occasion of the LGBTQ Pride month in June. In the past, such special editions were limited to specific markets.

For several years, the manufacturer Tenga, founded in 2004 and specializing in single-use toys, has been offering special editions of its masturbators. The Rainbow Pride Cup will now be offered worldwide on the occasion of the LGBTQ Pride month next June.

The Vacuum Cup’s usually red design will shine in the LGBTQ rainbow colors. The slogan accompanying the product is: »Unite with Pride: Proud Alone, Strong Together.« It uses the newly created acronym QUILTBAG, which is intended to include other forms of sexuality beyond the boundaries of LGBTQ. It stands for Queer, Undecided, Intersex, Lesbian, Transgender, Bisexual, Asexual, Gay and brings together, like a quilt, a patchwork of varieties of human sexuality.

At the launch, the company said, »Tenga supports the freedom of all people to be who they are, free of expectation. Tenga supports sexual minority communities globally, including with the production of the Rainbow Pride Cup, and by continuing to make charitable donations in various global markets.«

The Rainbow Pride Cup will be available worldwide in June 2019 and will cost around $8. More information about the manufacturer can be found here. Tenga’s German website is available by clicking this link.