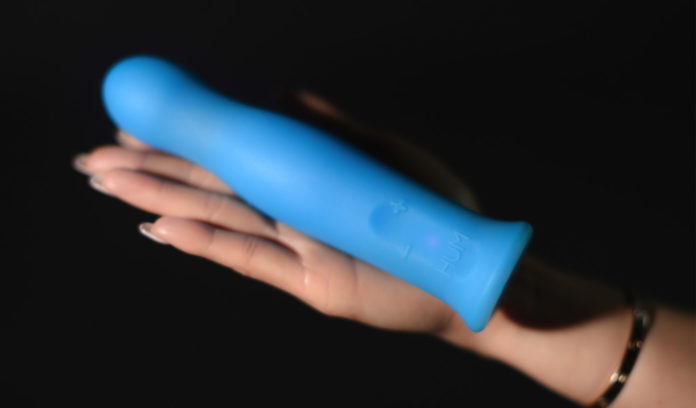 SAN DIEGO, Calif.—For Jonathan Driscoll, creating the HUM falls somewhere between building a better mousetrap and saving the world, one orgasm at a time.

“It sounds a bit lofty, I know,” he told AVN. “But if we can make people get more in tune with their bodies and get in tune with better sex, then they will have better experiences.

Dimensional Industries Inc.’s team of designers bring with them backgrounds working in physics, neuroscience, code writing, medical devices and much more. At the time, there was little in the way of sex tech.

Though today there are plenty of manufacturers who are using app-driven technology that can sync a pleasure product to their own or a lover’s smartphone, that type of function was not something the designers wanted for HUM.

“The information comes into a pretty powerful ‘brain’ that then tells the motors how to work, which direction to move, when to speed up or slow down and more,” Driscoll said.

He noted that while “haptic technology” has become a blanket term to describe similar technology used in other products, the HUM is full-on artificial intelligence at work. HUM can pick up on patterns and give them back to a user. Changing the pattern is as easy as rotating HUM to one side or another. There’s no complicated patterns to program or jumble of buttons to learn; just turn on HUM and start using it.

“People still have control over HUM, but they can also have the option of relaxing and letting it take them on a ride,” Driscoll said.

Every HUM is assembled in California, with the manufacturer using hand-poured medical-grade silicone and a body-safe coating that was developed for use in the fields of aerospace and medical devices. The process allows HUM to enclose the motors and technology inside a seamless piece of silicone that is waterproof.

“The method we use to pour the silicone and the coating make HUM very strong and durable,” Driscoll said.

HUM retails for $199 to $229, depending on the color option chosen, and is available for purchase at MeetHUM.com.