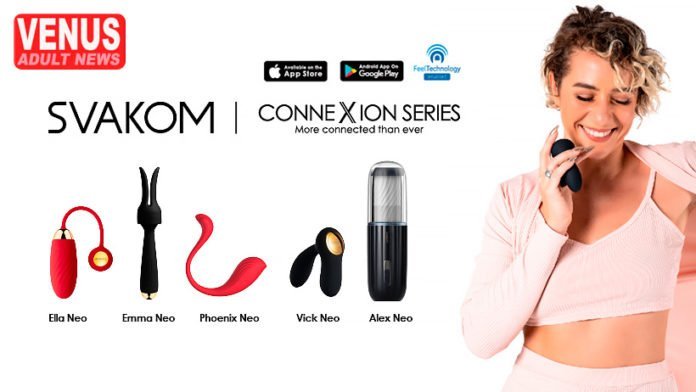 The US manufacturer of high-end sex toys Svakom is launching several new products on the market. The devices are all coordinated with the Feel Connect App of the VENUS exhibitor. So the age of smart sex toys has definitely begun at Svakom as well.

Alex Neo is a masturbator with numerous app-supported functions. The transparent tip of the device is eye-catching, allowing the user to watch himself getting stimulated directly. According to the manufacturer, the material should not only snuggle up, but an automatic grasping function should create undreamt-of authentic moments of pleasure.

The Reddot Design Award winning Emma Neo is a wand toy in a bunny ear design. According to Svakom, the head of the massage stick, which is suitable for numerous body parts, has an ultra-soft texture and can stimulate the clitoris in an exceptional way.

The Vick Neo is another men’s toy, a sophisticated prostate stimulator with a dual motor that can stimulate the prostate and perineum in different ways at the same time. 7 vibration patterns and five intensity levels provide for variety.

The corresponding app can be downloaded via Google Play as well as from the Apple App Store. It enables remote control, the sending of interactive videos and can be synchronized with webcams. Thus, the Svakom-Toys allow special opportunities for cam performers to interact with their viewers in new ways.