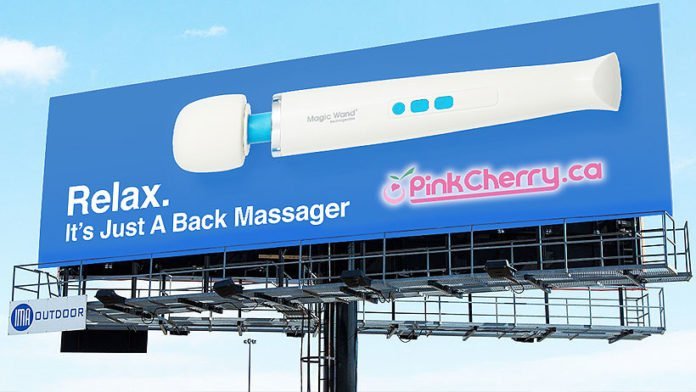 A 30 foot long Magic Wand will be part of the skyline of the metropolis Toronto in the coming weeks. The online retailer Pinkcherry has installed an oversized billboard on which one of the world’s most popular vibrators can be seen.

Ironic references to the origins of the Magic Wand

Vibratex is of course extremely pleased with the advertising campaign of PinkCherry, which according to its own statements is pushing its bestseller product with the campaign. Erin Sue is a spokeswoman for the company. She stated: »The Magic Wand is like royalty here. We often sell more Magic Wands in a day than some products sell in a week – it’s the thing that everyone asks for by name – and we’re thrilled to have it on our billboard.«

The huge advertising space was previously booked by another sextoy manufacturer. The label Womanizer, which belongs to the German WOW group, has advertised its »Scream Your Own Name« campaign on the same billboard

This makes Canada one of the few Anglo-American countries that currently cultivates a relaxed, progressive approach to sex toys and adult products.

You can find the PinkCherry website here. If you want to know more about the Magic Wand Importer Vibratex, please follow this link.