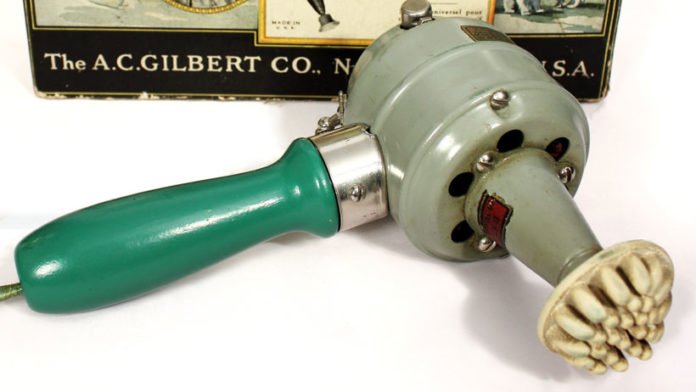 A representative of the Bremen-based company commented on the advertising campaign: »We’re so grateful that 150 years ago, a doctor invented the first mechanical vibe. Sure, it was steam-powered and needed its own room, but it was a start. To start, we’ve condensed its history, from ‘hysterical paroxysms’ to straight-up orgasms, into a two-minute read that will make you proud (and relieved) to be living in a golden age of vibes.«

#2 This phallic sextoy consisted of polished siltstone and was about 7.4” long, 1.5” wide and weighed a little over half a pound.

#5 During extra-realistic FUN in the 18th century, leather bags formed like male sexual organs were filled with hot milk, which shot out of a hole with external pressure. Disadvantage: Those who were in a hurry, burned their most sensitive areas. Ouch!

#7 Victorian vibrators were mostly used to treat men (!) for conditions including headache and constipation.

#8 In 1869, Dr. George Taylor introduced the world to the Manipulator. It was steam-powered and so enormous that its engine was kept in a separate room with the vibrating part poking through the wall.

#12 From then on, the spirit of invention was apparently unstoppable: more than a dozen different vibrators were presented during the Paris World Exhibition (1900). These included vibrators that dangled from the ceiling or were attached to rolling devices.

#14 A promising start. So, why don’t we have flying space vibrators now? Well, vibrators were frowned upon the U.S. from 1920 to the end of the 1960s; advertising was completely banned.

#16 Until the middle of 20th century vibes consisted mainly of glass or wood. Then various plastics and latex were added.

#17 In the late 60s, German journalist and author Oswald Kolle revolutionised the world as a “Sex-Education-Guru.” His films, like “A Guide in the Art of Love” (orig. “Das Wunder der Liebe”, 1968), reached 140 million viewers worldwide.

#18 In the USA, sex educator Betty Dodson was the one to make vibrators popular. In the 70s, she wrote articles and taught classes celebrating the virtues of the vibrators.

#20 At the end of the 1990s the first FUNFACTORY kegel trainers, the SFERA DUO, came onto the market.

#21 At the beginning of the 2000s, together with midwives and gynecologists, the SFERA DUO became the SMARTBALLS. Ideal for training and keeping the pelvic floor fit. Having even better sex is a particularly positive side effect.

#22 Since 2002, FUN FACTORY vibrators are waterproof and equipped with an ergonomic control unit.

#23 FUN FACTORY’s LAYASPOT revolutionized the world of sex toys. Today LAYA II is one of the most versatile vibrators ever and a constant bestseller!

#24 Love your rechargeable vibe? Our engineers designed the first one ever in 2005.

#26 2012: FUN FACTORY introduces the PULSATOR – another revolutionary step forward! A toy that pushes back and forth – hands-free – instead of vibrating.

#27 In January 2015, FUN FACTORY opened store number two – located at the Viktualienmarkt in the heart of Munich. 1,937.5 bright, sensual, and futuristic square feet on two levels.

#28 In 2015 FUN FACTORY took PULSATOR technology to the next level: with the Bi STRONIC FUSION, a dual-action-toy for both clitoral and vaginal stimulation, conquers the market.

#30 At the end of 2017, STRONIC G causes a sensation: the world’s first and only G-spot pulsator marks the beginning of a new STRONIC generation with usual power and intensity, while being slimmer and lighter than the original.