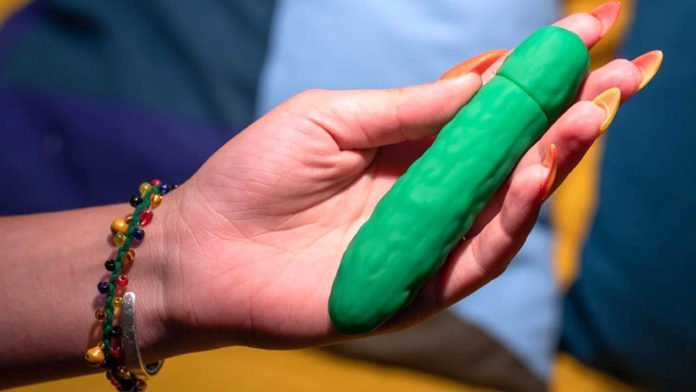 The eggplant as an erect penis is a widespread emoji. On the other hand, including food such as cucumbers and carrots or – as in Sploshing – cakes and other edible liquids and substances in the love play, is more likely to be one of the extreme fetishes that have found little recognition and acceptance in the mainstream. The sextoy manufacturer Emojibator has nevertheless specialized in toys in the form of food and is enjoying worldwide success with its unusual designs.

The sextoy producer Emojibator, however, has specialized in sex toys resembling food, especially vegetables. The manufacturer’s collection includes eggplants and chili peppers and, most recently, a lifelike replica of a cucumber.

The company was established in 2016 in Philadelphia, USA. The founders are Joe Vela and Kristin Fretz. Their toys have been featured in mainstream magazines such as Cosmopolitan, Time, The Guardian and The New York Times, as well as in popular online media such as Mashable and Buzzfeed.

The company has received numerous awards for its design work. Emojibator was awarded the XBIZ Award in the Best New Pleasure Company category and the two entrepreneurs were featured on Forbes magazine’s 30 Under 30 List.

A representative of the company says: »Today, we give you our latest creation: The Pickle Emojibator. This big dill is our most ergonomic design yet and features raised grooves for increased stimulation and pleasure.«

The cucumber version of Emojibator is equipped with 10 vibration settings and is completely waterproof. The toy is made of silicone and is available for 29 dollars.

Further information can be found on the manufacturer’s website.