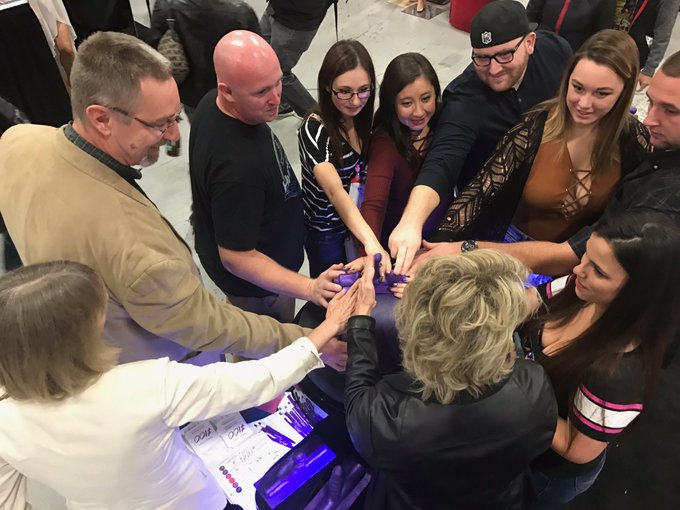 Vocativ published an article celebrating the 30th anniversary of the Sybian: »A family-run business in rural Illinois reflects on how its famous product has changed with the times.

Inspired by the complaints of infrequent orgasms he heard from women in the instructional dance classes he taught, Lampert launched the Sybian through a titillating cover story in Penthouse Forum magazine in December 1987. Quickly, the massive gadget would come to upend the small but growing sex toy industry.

“Plug into the ultimate joy ride,” the Penthouse Forum article enticed, featuring the first-person account of Jessica West, a writer who first saw the Sybian on display at a swinger’s convention and chronicled her experience trying it out before it went on sale.

“We launched quietly, without much advertising and not knowing exactly how the Sybian would be embraced,” Lampert, now in his eighties and recently retired, told Vocativ in an e-mail through his daughter, Bunny, who helps run the family business at its farmhouse office in rural Illinois. What would later follow could only be described as Sybian madness.

Within months, the thousand-dollar-plus machinery would gain an outsized reputation in the adult entertainment community — and later, in a more mainstream world after live Sybian demos became a regular feature on the Howard Stern Show. Lampert himself even appeared on the radio show once, coaxing a pornographic actress through what she estimated to be about 15 or 20 orgasms in less than five minutes. The Sybian received its first and only New York Times mention in an article about the radio personality. (…)

>According to Bunny Lampert, the Sybian has been shipped to 80 countries around the world, and sales have only increased year-over-year since 1987, excepting mild downswings timed to the 2008 financial crisis (she declined Vocativ’s request for exact sales figures). Employees who make the Sybian in Monticello, Illinois, work every day that UPS ships.

The biggest change in 30 years, Bunny Lampert said, is society’s increasingly open and sex positive attitude, which has influenced how the company talks about its product — at least, in some settings. (…)

The Sybian — named for an ancient Greek city associated with luxurious living — costs over $1,300 not including its many special attachments.

While a cheaper competitor with a similar design called the MotorBunny emerged in 2015, reviewers say it’s louder and less powerful. (…)

“Since the industry has gotten as large as it is now, the intimacy level between the performers has dropped, so you really don’t see real orgasms, not like you used to,” she said. “[People] want to see real orgasms. When you find your favorite performer’s Sybian scene you can pretty much guarantee that’s their orgasm.”

“I’ve noticed that the Sybian’s really popular with camgirls, who can interact with the people watching them,” she said. “As some of the camgirls rise to the top and get a huge following, they can spend the time and have those real orgasms. It’s a different kind of connection.” (…)«