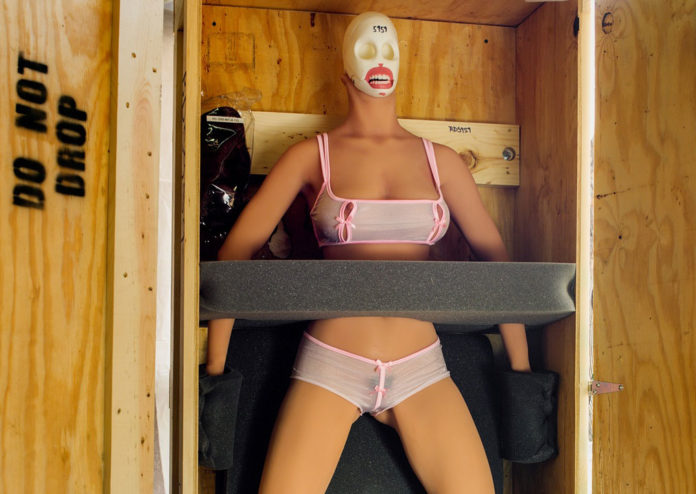 Lizzie Crocker reports for The Daily Beast: »Sex robots are enjoying a burst of media popularity. But can you really find the right mechanized companion to bed down with—and what if you just need a cuddle?

Unconditional love is hard to come by in a flesh-and-blood romantic partner. That’s why Douglas Hines created Roxxxy, a robotic companion programmed to satisfy all your romantic and sexual desires.

Those looking for warmth and companionship will find it in the “Mature Martha” version of Roxxxy, an older MILF-type. Twentysomething “Wild Wendy,” by contrast, is more sexually outgoing. Eighteen-year-old “Young Yoko” is less sexually experienced, but very spontaneous and experimental in the bedroom. And “S&M Susan” is into ball gags and being tied up.

Sex robots have been much discussed in the media recently, with features in outlets including British GQ, CNET, and the British Daily Star, which recently reported that Marilyn Monroe was the most regularly requested sex robot by heterosexual men. The problem is, said Hines, that Monroe’s estate would have to approve a likeness of her self being transformed into a sex robot.

“Our robots allow people to experiment and fulfill the desires that they may not be able to express because their real-life partner doesn’t allow it,” said Hines, who unveiled his first version of Roxxxy in 2010 at the Adult Entertainment Expo in Las Vegas. He established his New Jersey-based company, True Companion, to sell artificial companionship to the public.

His robotic Roxxxys can be tailored to match a person’s social, romantic, and sexual desires. If you’re interested in sports, your True Companion sex robot might talk to you about an upcoming NBA game or tennis tournament. If your aging mother is unwell, your True Companion robot will ask how she’s feeling—and might propose sex as a way to relieve your stress.

“All three inputs are functional and provide an amazing experience,” Hines said when asked about the extent of his robots’ sexual functions. They don’t walk but they gyrate their hips and caress you. “Customers give feedback about the beautiful feelings they get when they engage our robots because their bodies move to allow for a beautiful interaction.”

Hines said most of True Companion’s customers are men in their thirties, forties, and fifties. “They’re gentlemen who don’t necessarily have problems meeting women,” he said, “but if they do we make it very easy for them to find a partner who not only satisfies their sexual requirements but gives them unconditional love and companionship.”

Roxxxy isn’t cheap: Prices start at $9,995, but may cost up to $12,000 with customizations. Specified eye color, nail polish, clothes, pubic grooming styles, and other “configuration options” will drive the price up several hundred dollars, Hines said, noting that requests for large breasts are particularly common.

And while he introduced his robotic companions to the tech world as sex robots, he insists the relationships between customers and their customized Roxxxys goes far beyond the sexual. “We’ve found that the social engagement, the warm embrace, the loving touch, and the ‘I’m there for you’ kind of thing is very important to our customers.”
The robotic version of an ideal woman or partner has long been the stuff of Hollywood fantasy. The pretty and submissive robots in The Stepford Wives were designed by men to be ideal housewives. The humanoids in Blade Runner were seductive and dangerous. The beautiful robot in Ex Machinaand the disembodied voice of Samantha in Her also play into futuristic fantasies about emotionally and sexually available women.

The sex robot’s earliest incarnation just might be Galatea, the beautiful and lifelike statue created by Pygmalion in Greek mythology. In Ovid’s “Metamorphosis,” Pygmalion falls in love with his creation and brings her to life with a kiss.

Some feminists are adamantly anti-sex robot. 2015 saw the launch of the Campaign Against Sex Robots, which argued that sex robots are “potentially harmful and will contribute to inequalities in society” by further reducing women to sexual objects.

Yet others say these artificial companions are something of an inevitability in a technological world that has long served sexual desires, from vibrators to virtual reality pornography. (The “sex tech” industry is estimated to be worth $30 billion.)

In his 2007 book Love and Sex with Robots: The Evolution of Human-Robot Relationships, David Levy—an artificial intelligence expert—writes that by mid-century, “love with robots will be as normal as love with other humans, while the number of sexual acts and lovemaking positions commonly practiced between humans will be extended, as robots teach more than is in all of the world’s published sex manuals combined.”

And there’s an increasing desire for male sex robots, according to Hines, who is working on developing Rocky—the male answer to Roxxxy.

“Both women and men have expressed a desire to have Rocky,” he said.«