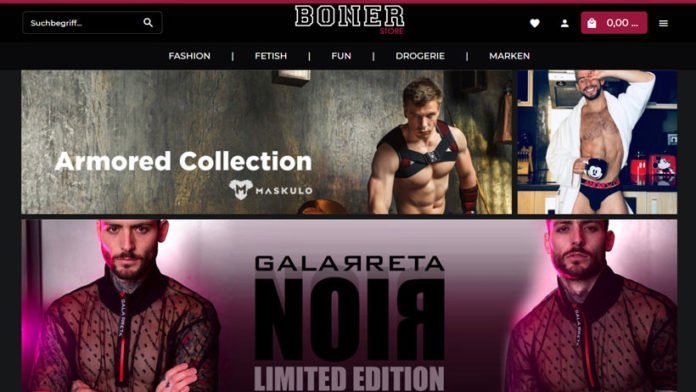 The publishing house and retail company Boner from Berlin has launched an online store. The company now operates an ambitious English-language online shop in addition to its brick-and-mortar stores in Berlin and Vienna as well as the magazine Boner World.

Founded in 2013 as a Berlin city magazine, Boner Magazine has established itself as one of Germany’s leading magazines for sex-positive and gay themes. The magazine, run by Torsten Schwick, is now available at over 200 locations in Germany.

The two Boner stores in Berlin and Vienna have performed so well that the company is now on an expansive journey. The English online shop offers free delivery throughout Europe starting at a purchase value of 50 euros.

On the occasion of the launch, a spokesman for the company said: »Berlin’s most popular brick-and-mortar store for men now brings all their items to the doors of their customers across Europe. The new online store features the latest in fetish, fashion, toys and sex essentials for men.«

Chad Hampton is in charge of the small group, whose product range is to comprise 20,000 items by the end of the year. Hampton says: »We’re excited to offer all of Europe access to one of the largest selections of quality products for men.«

You can find the website for the new shop here. Boner Magazine can be accessed online via this link.