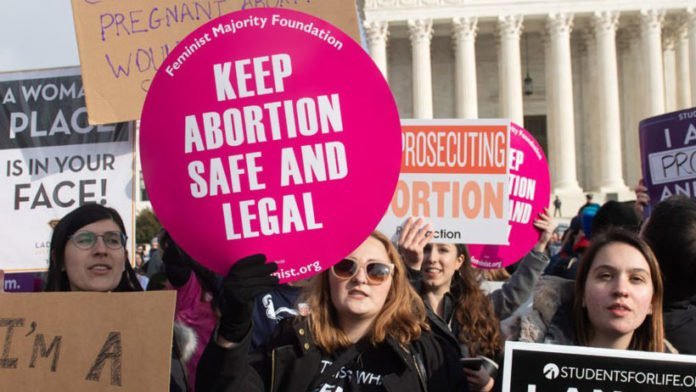 Sextech-Startup Dame Products is getting into the messy fight about current anti-abortion laws being passed in several states in the US. The company took part in a costly full-size ad in the New York Times criticizing the conservative revolution attacking the right to abortion.

A decades-old conflict is coming back. The US remained deeply divided along party lines over the right to abortion. Ever since the Supreme Court decided in the landmark case Roe vs Wade that the right to one’s own body is covered by the constitution right-wing and religious groups tried to get the ruling overturned by getting a conservative majority on the highest court of the land. Last year they got exactly that. Donald J. Trump installed two new judges on the Supreme Court and the conservative voices now are in the majority.

This is why several Republican-dominated states thought it was the perfect time to try to move against abortion rights. The new laws Georgia, Alabama, Ohio are only the most extreme cases of a wave of legislative attacks against reproductive rights. Progressives, Democrats, and a majority of women are alarmed. Abortion might become illegal again in the USA.

That is why several companies decided to take a clear stand against the current trend of the anti-abortion legislatures all over the United States. Following increasing protests by prominent figures and Hollywood celebrities Dame Products decided to take part in a full-size advertisement in the New York Times supporting women’s reproductive rights and the pro-choice movement. Next to five other female-led companies, Dame’s founders Alexandra Fine and Janes Lieberman made their voices heard and spent a lot of money on it.

Representatives from Cora, Clary Collection, Fur, Look, Sustain Natural and Thinx all signed an open letter containing in bold letters the following message: »Abortion is: a human right, a constitutional right, a personal choice, health care, lifesaving, gene equality, owning your own body, not a time, not up for debate.«

The letter goes on to urge other companies and organizations to also protest against any threat toward Roe vs. Wade. It says: »Today, we loudly and boldly declare that we will not be silent in defense of fundamental human rights and we challenge our peers in the business community to do the same. Now is the time to speak up. Together we can defeat these unconstitutional attacks on our rights.« 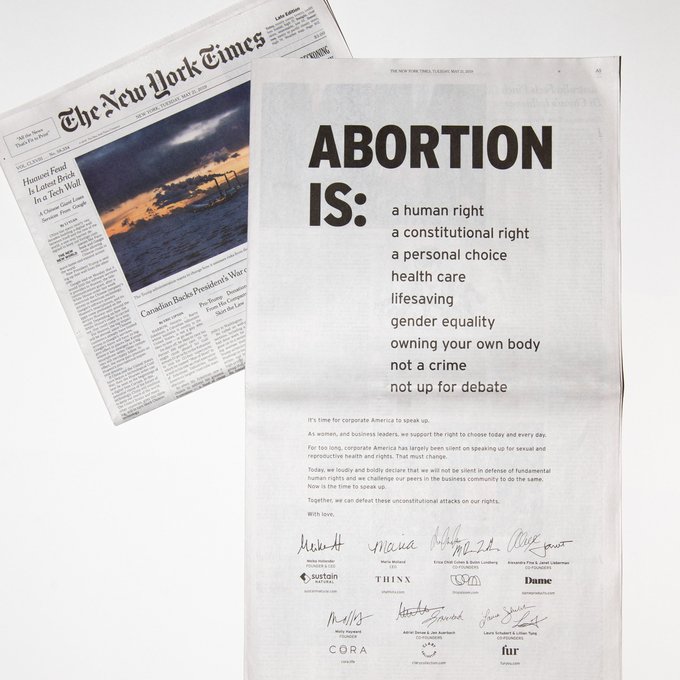 In an interview with Inc.com Alexandra Fina talked about her personal motivation to make her point of view heard: »I’ve worked at Planned Parenthood — it’s never an easy decision. I’ve held the hands of women during their procedures. I know the gravity of their decisions and safety we offered them on one of their darkest days.« She hopes other companies follow the letter’s core mission. In a combative tone, she added: »We are the future and we will fight to protect women’s wellbeing.«

On Twitter, the campaign is trying to build steam with the hashtags #stopthebans and #mybodymybusiness. Dame Products used its Twitter account to promote the open letter:

We’ve joined forces with @shethinx, @sustain, @thisisloom, @fur_you, @clarycollection, and @corawomen in collective action against the recent policies putting the lives of people who have a uterus at risk now more than ever. Thanks, @nytimes. #mybodymybusiness #stopthebans pic.twitter.com/cV0V5dPxFR