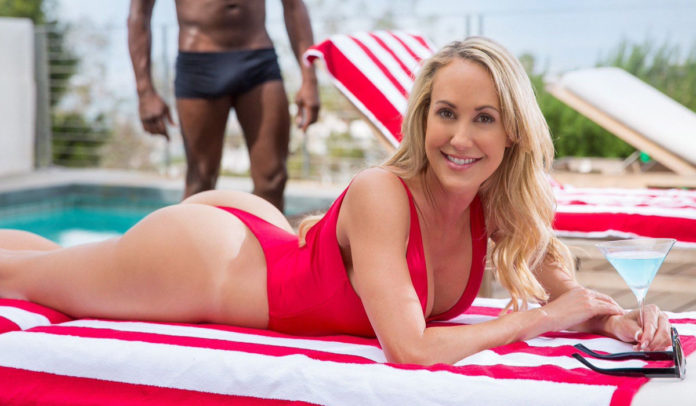 We had an incident occur in our personal lives where we said, “This is insane. I can’t believe this is happening to us.” My own family came after us because of the careers we chose. We were amazing parents before we chose this career, and all of a sudden those words dissipated and they decided we were shitty parents and they needed to do something about it because we were doing something we loved. So they used the court systems, and it was horrible, and they lost. Back in 2005, 2006, there was a picture taken of my baby who was 13 months old, naked on a beach in Florida. My stepmother took the picture and sent it to the local police in my state as child porn. It was ridiculous. Local law enforcement had to go through my home and they said, “There wasn’t anything there.” So I wasn’t going to stand there quietly. I sent a cease-and-desist.

When I started to talk to people in the industry about it, they’d say, “I’m fearful of my ex-husband,” or “I’m fearful of my parents,” even though what we’re doing is legal. Just because we’re porn stars doesn’t mean that we’re doing inappropriate things at home. So I started an advocacy group, Parents in Adult, putting attorneys that were willing to work with us and protect our families as a resource for people having similar issues, because it was impossible getting attorneys to work with us. They wouldn’t touch it. And I thought, “This is insane. We pay our taxes. This is a legitimate business.”

Mine is of age now, but when she was younger my husband and I did everything we could to protect her. There’s a reason it’s for adults: It’s called adult entertainment. People would say, “Have you told her?” I’d say, “No, she’s not 18.” She knew what her parents did was for adults only, and that I did lectures at colleges on alternative lifestyles and alternative sexualities, and she was raised in a very socially liberal, open-minded household. So when she finally did find out, I was more nervous than her.

MH: How did she find out?

A kid in school said, “Hey, I hear your mom is Brandi Love.” Eventually, she’d say, “That’s her business, not mine.” But it came to a head in a situation where she came home and was very upset. I’m like, “OK, here we go.” She wasn’t upset about me. She was upset because kids were talking about her mother. She’s very feisty like me, and honestly, it only bonded me to her more, because she’d start saying, “You don’t know my mom. You don’t know anything about her.” Through the years, of course you have concern, because you think, “Is my kid going to judge me? Will they look at me different?” But thank God it didn’t turn out that way. It actually created an even stronger bond. She’s not like me in some ways — she’s a firm believer in monogamy, me not so much. But we respect each other’s differences. So her finding out was everything a parent can hope for.

MH: I mean, I think if I were in that situation, I’d honestly want to know as little as possible.

I started shooting adult in LA. I shot my first pro scene in 2008, and at that age, I was in my late 30s, and it was more appropriate, and I am a mom, so I thought it was awesome. I could understand a girl who’s 28 not liking that and saying, “Wait a minute. I’m still a babe.” But I came in as a mature woman. So for me, it was really hot.

I think I’ve lived a life, I’ve worked in mainstream. I had executive positions. I’m married, so I have a solid foundation. I chose adult. It didn’t choose me. I left corporate America to get into the adult industry. So I think it’s a very different experience than a girl who’s 18. So to go right into adult — I don’t know. I can’t imagine. I think it’d be rougher waters. I think it’d be more difficult to figure it out. I know what I want, I know what I’m doing. I took this on not as a hobby or a whim, or because I had to. It was more like, “Oh my God. That’s a real job?!?! I want that.”

Oh, my God. How many women in their 40s get roles in Hollywood? I mean, I watch Jane Fonda now and I’d bang her. She looks sick. But they’re not getting the same roles. There aren’t as many. Whereas in adult, there’s more work for the more mature than there is for the teen. Every day I’m working.

MH: You’ve shot a lot of fauxcest, or fake incest, scenes. How’d you get pegged into that role, and what do you think is behind the explosive popularity of that genre?

I don’t know if I got pegged into it. Because of my age, it’s just appropriate — I could be somebody’s mom. With anything, there’s an ebb and flow, and right now that’s the hot niche. Why is it hot? I mean, I’m not a psychologist, but it’s taboo and the more taboo something is, the hotter it’s gonna be. It’s fantasy. That’s what it is: adult entertainment. The entertainment is feeding the fantasy.

MH: Do you like doing them, or did they make you uncomfortable at first?

They’re interesting. They create more opportunity to act. At first I didn’t get it, I was like, “What? You want me to say what?” But then I got into it, because my job is to be an actress and have fun and make that fantasy believable. It doesn’t have to be mine. That’s what I’m hired to do. Once I wrap my head around that, I’m like, “OK, let’s roll with it.”

MH: What’s the craziest thing you’ve been asked to do on set? Has anyone ever had an accident?

Well, some of the guys can be pretty acrobatic. Some of the positions — I feel like we should put a disclaimer like, “Don’t try this at home, because you can break your forehead or lose a tooth.” I’ve never seen anyone get hurt. I personally have never had an accident, but we do have a gentleman in the industry who got his dick broke. She came down on it, and the angle was wrong, and she hurt his dick. But I’ve never seen that happen firsthand.

MH: OK, here are some reader questions. Here’s one we got literally three times: How do you keep your abs so taut?”

(Laughs) Many of your readers will know this: It’s a combination of diet and exercise. There’s no super pill. I’m not in the gym three hours a day — maybe an hour, honestly. It’s about 25 minutes of cardio and 35, 40 minutes of weight-training. Low-fat, high protein. As many fruits and vegetables as you want. I try to eat clean, but I’m not super strict about it. Abs I do every day — they’ve always been pretty defined. My muscular makeup is just there. I used to do weighted crunches. I can get weird-looking. So now I just do an ab roller. Good old Ab Roller! I do about 300 a day and that’s it.

MH: The next one is what is your favorite kind of cheese?

That’s a tough one. I’m a wine and cheese crackers fan, but I guess my favorite would be goat cheese.

MH: Do you prefer younger men?

Age is not a consequence. There are benefits to each.

MH: What are the benefits?

With younger men, it’s athletic sex. There’s cardio, there’s endurance. If they don’t sweat, they feel like they’re not doing it right. Whereas older men know a woman’s body, so it may be more satisfying. They take their time. It’s not romance versus aggression, it’s — one is more of an endurance situation, and one is more of a sensuality situation. It’s the difference between women and girls. There’s a connection that older women have that young girls don’t have. That’s the beauty of sex. It’s like snowflakes — no two experiences and two people are gonna be the same. But are they all beautiful? Yes.

MH: I read that you’re a Trump supporter. What do you think of his first year in office?

In a nutshell, I’m thrilled. He’s doing everything he said he was gonna do. The simple fact is, for all the people who are anti, I get it. His personality sucks ass. He rubs people wrong. He’s a narcissist. I’m way more concerned about what he’s doing for the country I love and that I live in. For that reason, I’m pro.

MH: Have you met him?

MH: Would you sleep with him?

No, I mean — I think that situation has been covered appropriately. I’m not gonna get into that. But would I? It would be based on certain circumstances. If Melania said go for it, and she showed up, then hell yeah. He’s a powerful alpha male. I’m attracted to that. And his wife is hot and shit. So if they came as a package deal, I’d be all over that.

MH: Is certain stuff off-limits in your marriage that are on-limits on camera, or vice versa?

MH: Is there anything you won’t do?

Anal. I’ve been asked for 12 years and the answer is the same. My butthole is the same and it’s going “No, thank you.” We’re built different. Some girls can swallow a banana and go, “Smile.” I’d be in tears and gagging. It’s just a difference: Why can some girls do that and some can’t? When I see girls who are 85 pounds and take steel, I look at that and go, “Anatomically, that’s incorrect. How is it not poking out of her throat?” But it doesn’t. She’s built different. Interestingly, the smaller the chick, the bigger the dick she can take.

I don’t know if it’s the angle, but every small chick can take more. Every tall girl I know, she’s shallow. She’s like, “Too much dick. Too much dick.” The smaller girls are like, “Whee!” So my theory is the smaller the girl, the bigger the package she can take. I’ve never seen the x-rays, but — (to me) You’re a little spinner, so how big can you take?

MH: I’m not. But I appreciate the compliment.

Did you see Pam Anderson and Tommy Lee? He’s huge, and she’s itty-bitty, and she took it like nothing. It’s impressive. I don’t get it. But that’s my theory, and I’m sticking with it.

ABOUT US
FOLLOW US
© 2021 Venus Adult News
We use cookies to ensure that we give you the best experience on our website. If you continue to use this site we will assume that you are happy with it.Ok