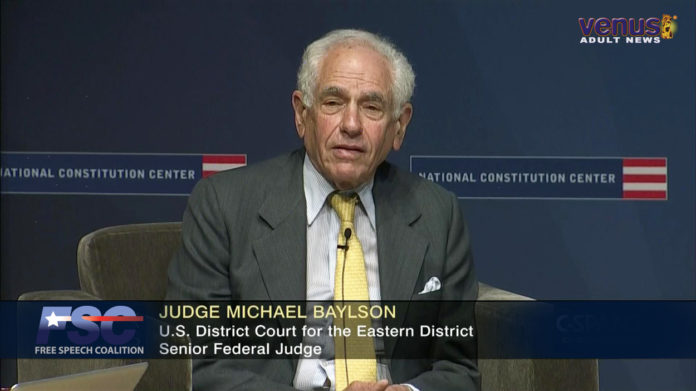 PHILADELPHIA, PA—In a ruling handed down today by U.S. District Judge Michael M. Baylson, based on an order from the Third Circuit Court of Appeals, 18 U.S.C. §§2257(f)(5) and 2257(c) as well as the implementing regulations found at 28 C.F.R. §75.5 have been declared unconstitutional. Both sections of the law deal with requiring adult producers to make performer identification documents and records available to federal inspectors without warrants and without warning—or in the words of the statute, “shall make such records available to the Attorney General for inspection at all reasonable times”—and eliminates the crime of refusing “to permit the Attorney General or his or her designee to conduct an inspection under subsection (c).” The corresponding sections of Section 2257A, which applies to non-hardcore productions, are also now void.

Although the adult industry knew this was coming, based on the Third Circuit’s June 8 decision, it was up to the trial court to deliver the final blow to the government’s claims of immunity from Fourth Amendment search-and-seizure laws which allowed FBI agents to simply show up at the doors of adult producers, demand entry and demand to see 2257 records without warrants.

“Today, we achieved a great victory in the constitutional challenge against 2257,” said J. Michael Murray, the attorney representing the Free Speech Coalition and 15 other plaintiffs in the lawsuit against the statute. “The federal district court, on remand from the Third Circuit, entered a judgement today declaring 18 U.S.C. §2257(f)(5) as well as portions of subsection (c) of those statutes facially unconstitutional under the Fourth Amendment, and it’s a great victory for the Free Speech Coalition and the other plaintiffs who fought so hard, and we’re very, very excited about it and very pleased. This is the result of our amazing victory in the Third Circuit.

“What remains still is the district court still has to deal with our First Amendment challenge to the statutes, and that’s the next victory that we have to achieve, to hopefully get the entire statute struck down,” he added. “There will be further briefing and proceedings on that issue, but we’re excited that this judgement in favour of the plaintiffs and against the government was entered today.”

Not covered by the judge’s ruling are any of the First Amendment issues, such as the requirement to keep the records themselves and the manner in which they must be kept. On that score, Judge Baylson ordered on December 14 that the parties “file cross motions, without legal memorandum, on January 23, 2017. The Court will have a recorded telephone conference on Wednesday, January 25, 2017 at 10:00 am to discuss briefing schedules on the pending motions, and a date for oral argument.”

“I still recommend that everybody comply with 2257 because the case isn’t over,” Murray noted. “We’re still litigating over the First Amendment issues and there can be further appeals, but this is a tremendous victory that was achieved today, but there’s more to follow and so I highly recommend that everybody still comply until the statute is declared unconstitutional in all of its aspects and no appeals are forthcoming. We’re going to be filing some motions on the First Amendment claims later this month and then the judge is going to have further briefing before he decides the First Amendment issue.”

When Judge Baylson considers those First Amendment issues, rather than viewing the evidence under “intermediate scrutiny,” he will be required to do so under the doctrine of “strict scrutiny.” That means, in order for 2257 to survive, the government will have to prove that 2257 furthers a “compelling government interest,” is “narrowly tailored” to advance that interest, and is the “least restrictive means” to achieve that interest. It is doubtful that the government can provide evidence supporting all three of those prongs, so the adult community can expect a complete victory under the statute.