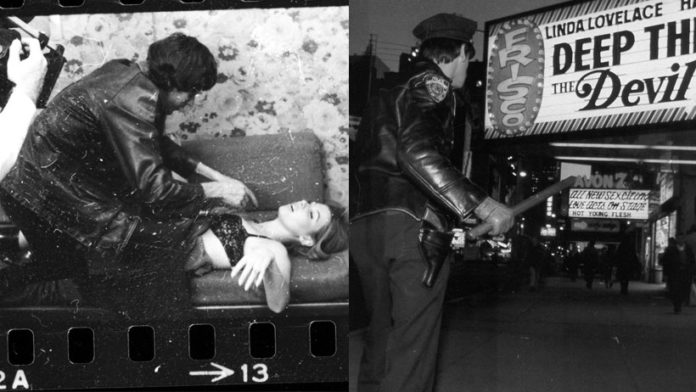 Apparently, the level of production was rather modest. However, the investigators could win an experienced actress named Michelle Lake for the female part in the movies. According to Lake, she was paid a decent fee for her participation. If you follow the synopses on IMDB, the first film tells the story of a female hotel guest who calls a bellboy to her room because of a dripping tap. The second film is about a thief who breaks into a woman’s home. The third film shows the wild wedding night of a newly married couple.

Lake played in 16 porn productions in the 70s, including classics like »Eighteen and Anxious«, »Insane Diaries« and »Venture into the Bizarre«. About her involvement in the New York police films, she now says: »Over time, many of the details of many of the films I made have blurred in my memory, but for some reason, I remember a number of things from this job: I remember the room, I remember that the ‘producers’ were a man and a woman, and I think I remember a cameraman. The location itself was a shitty hotel room, nothing fancy.« Lake says that she can’t remember her film partner, but that she was paid cash and that she was given the flowers that were in the room as decoration.

A few weeks later, Lake got a call from the press. Allegedly, the New York police had footage of her shoot for the police and some television team asked the actress for an interview. The media attention destroyed the NYPD’s plan and led to a public debate about wasting taxpayers’ money on pornographic movies. In an interview with the Rialto Report, which is always worth reading, one of the investigators active at the time said that he still did not know how the media got wind of the operation. »The news coverage fucked everything up. It ruined everything.«

The failed attempt, which was accompanied by media malice, finally disappeared into the NYPD archives without a sound. But from today’s point of view, the reason was somewhat strange. The former chief of the New York police, Michael Codd, stopped the action mainly because a policewoman was present during the shooting. Even today, the policewoman’s partner mocks that reasoning: »Seriously?! You’re mad because a woman was involved? That’s your big problem?!«

We very much hope that Hollywood will hear the story and make a brilliant farce out of it. George Clooney, are you listening? Steve Buscemi? Scarlett Johansson? Someone must take this on.

If you are interested in the history of pornography, you should definitely subscribe to the Rialto Report website. A more careful, loving form of oral history is hard to find.