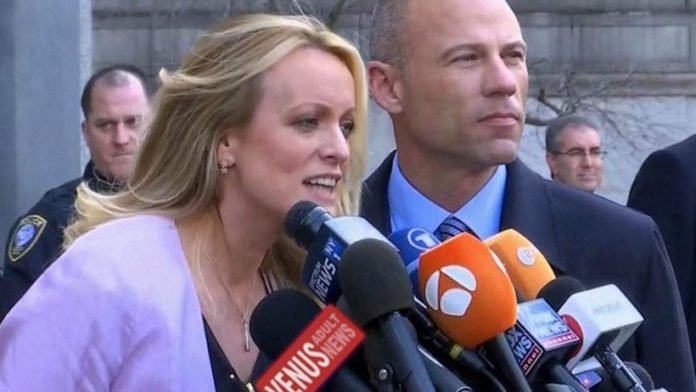 After Stormy Daniels separated from her former lawyer Michael Avenatti a few weeks ago, the gossip just didn’t stop. Apparently, Avenatti owes his former client a lot of money. Has Avenatti embezzled donations and proceeds from Stormy’s book contract for Full Disclosure? In New York, a lawsuit was filed against the litigious lawyer.

The former lawyer of Stormy Daniels has lost a lot of popularity for months. Several lawsuits Michael Avenatti conducted for Daniels failed terribly, another actress accused him of domestic violence, his unfortunate interference in the appointment of Judge Bret Kavanaugh to the Supreme Court was considered extremely negative by both friend and foe, Stormy Daniels rescinded the cooperation, and recently the lawyer was charged with extortion. Avenatti is said to have tried to blackmail the sports company, Nike.

Investigators in New York City have now filed suit against Michael Avenatti. The lawyer is said to have kept the payment of 300,000 dollars for a book contract for Stormy Daniels to himself. Apparently, the lawyer acted with criminal energy. According to the Washington Post, he forged a document in order to keep the $300,000. Only after a long back and forth did Avenatti transfer half of the sum to Daniels. The rest he apparently wants to be offset against work he had done for the actress. For the most part, Avenatti claims to have worked free of charge for Daniels.

As expected, Avenatti denies the accusations via Twitter. There he wrote: »No monies relating to Ms. Daniels were ever misappropriated or mishandled. She received millions of dollars worth of legal services and we spent huge sums in expenses. She directly paid only $100.00 for all that she received. I look forward to a jury hearing the evidence.«

Public dispute already in November, a final rupture in March

Daniels herself had already complained in the past that her lawyer had not given her any insight into the finances. It is said that donations from crowdfunding campaigns were withheld from her. Avenatti is said never to have disclosed the amount of the donations, nor did he mention the exact sum nor the amount of the remaining funds from the campaigns. In addition, Stormy complains: »Instead of answering me, without my permission or even my knowledge Michael launched another crowdfunding campaign to raise money on my behalf. I learned about it on Twitter.«

In March of this year, the famous duo, which dominated the headlines throughout last year, finally parted ways. Obviously, the reasons for the split were somewhat different from what was first published in the news.

Avenatti, once traded as a possible Democratic presidential candidate, continues his free fall into insignificance. The lawyer will probably appear in court for years to come – on his own behalf.