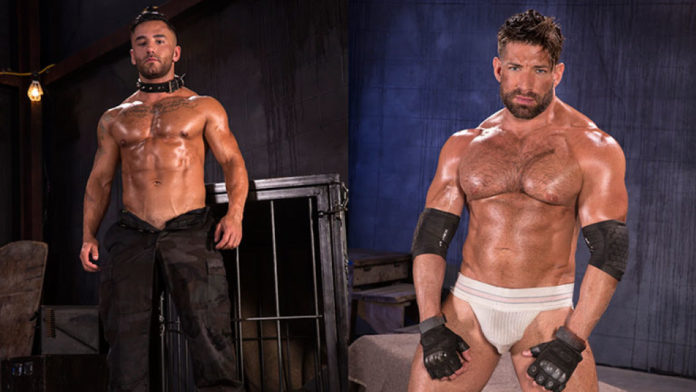 According to the company, regarding Wasteland‘s story, not too far in the future, things take a turn for the worse. The continent becomes a barren hellscape, a ‘wasteland,’ where the only valid currencies are food, water, shelter, and hardcore fucking. From the mind of director Steve Cruz, Wasteland is the story of the rough, ruthless survivors who wield their big muscles and big dicks to stay on top of the food chain. The premiere scene is now live on RagingStallion.com, with the DVD and scene downloads available on January 6, 2017 on the Falcon Studios Group Store.

In the new update, Bruno Bernal is caged in captivity, subject to the whims of his ruthless guard, Bruce Beckham. After a thwarted escape attempt, Bruce uses his enormous cock to assert his authority over Bruno.

“In the Wasteland, survival is everything, and these guys keep their survival tools in their pants,” said director Steve Cruz. “With the stakes higher than ever before, you’ll be shocked and amazed at the lengths these men will go to get off.”

RagingStallion.com, featuring over 2,000 spectacular scenes and the World Premiere of the debut scene from Wasteland starring A-Team Exclusive Bruno Bernal with Bruce Beckham, is available for promotion through the Buddy Profits affiliate program.

Affiliates can choose between $35 pay-per-signup or 50% revshare for all memberships they refer, including trials. Affiliates are encouraged to visit BuddyProfits.com for promotional material. For more information about the Buddy Profits affiliate program, contact the Affiliate Manager at [email protected].