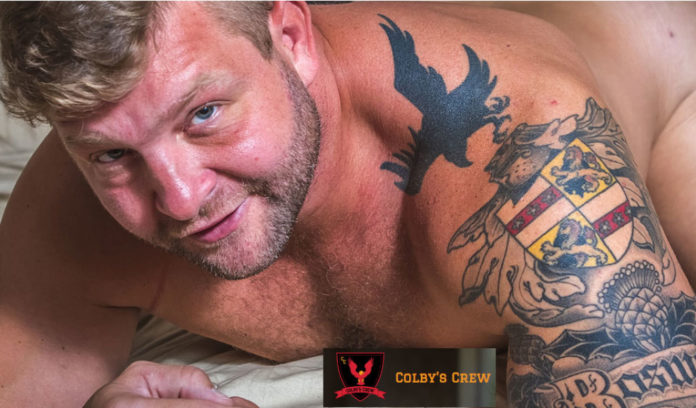 “Dude Dollars’ team has been working feverishly during the past few months preparing for this major launch,” French said. “We are very excited with Colby Jansen’s hard work, his explosive on-camera presence and his amazing ability in bringing together new guys and more seasoned models to work together. Colby’s furry jock-type personality is providing great chemistry to the new site.”

Earlier this fall, Colby Jansen signed on as DudeDollars’ first exclusive performer. Since spring, Jansen and his crew have been crisscrossing North America, recruiting new talent and shooting original content, featuring the former pro rugby player in combination with some of gay porn’s hottest studs. Building on his background, ColbysCrew.com will take a decidedly sports-themed approach and will almost always feature a mix of more mature, experienced men over 30, paired with younger 18- to 30-year-old performers. As such, the site will delve into fantasies like Office Manager/Intern, Professor/Student, Coach/Athlete, and much more.

“This is the first phase of an exciting multi-year and multi-million dollar plan that will offer gay adult consumers around the world several new and unique sites, exciting content, many hot newcomers and some of porn’s most seasoned performers,” said Hector Camacho, the Company’s CEO. “This is the first of many exciting things to come from Online Entertainment and DudeDollars.”

“Come January 3rd, ColbysCrew.com will be offering high-quality exclusive HD content at a very competitive rate for members,” said French. “We are encouraging potential affiliates to sign up at DudeDollars.com and to start promoting what will surely be an online winner within the gay adult market.”

As a launch promotion, DudeDollars will be offering ColbysCrew.com at $19.95 for a one-month streaming-only membership (regular price will be $24.95/month), as well as a one-year special membership rate of $99, versus its regular price of $120/year.

DudeDollars is the affiliate program of Online Entertainment LLC, the new gay adult entertainment company created by Manhunt’s co-founder and owner Jonathan Crutchley. Through DudeDollars, the company is working to build a unique library of new digital content and a world-class network of gay adult membership sites.