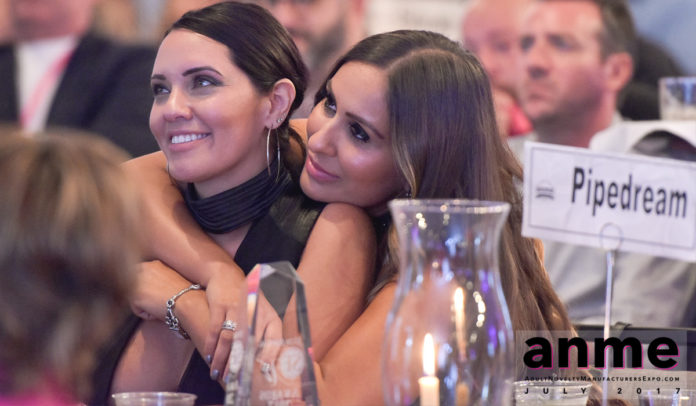 The ANME trade shows in Burbank, California, are among the most important events in the sex toy industry. The summer edition of ANME came to a successful close last week. A walk around the fair leads to numerous industry leaders such as Doc Johnson, Pipedream and Perfect Fit, but also to innovative start-ups and niche players.

From July 15 to 17, the who’s who of the sextoy industry met in Burbank, California, for the summer edition of ANME Founders, originally launched by the recently retired CEO of Pipedream, Nick Orlandino.

The unofficial start was marked by the 25th anniversary celebration of Sportsheets, which hosted a beach party at the company headquarters in Huntington Beach. More than 50 tons of sand were piled up and provided with typical beach accessories and a bar. Musical support of the evening was the Joe Walla Band, and the guests ate, drank and networked until late into the night.

At ANME Founders, Sportsheets continued to show itself in birthday spirit and presented a new company logo and numerous new vibrators.

At the booth of the industry giant CalExotics, which recently signed an exclusive distribution agreement for the EU with the Dutch Scala Group, the flagship product line »Pavé by Jopen« was on display: slim vibrators for the high-end market. A representative of the company said: »Everyone loves this line. Even competitors have come up and said that they love it.«

The company also focused on the California Dreaming line. The new models presented there included the »Orange County Cutie«, »Santa Monica Starlet« and »Malibu Minx« vibrators. The vibrators are not only visually different, the individual devices have either a shock, pulse or suction function. The company offers retailers inflatable surfboards as promotional material for the summer beach collection.

The New York-based sextoy company Nasstoys, which has been active on the market for over 40 years, has been converting its product range for several years in an attempt to meet the trend towards designer toys and lifestyle products. A new wave of novelties has been announced for January to further advance the modernization of the brand. Currently, Nasstoys still strongly relies on the success of the »American Whopper« brand. The company also presented new displays for the Nasstoys Infinit collection at ANME. The trade press particularly highlights the new »Commander Heat Up Butt Plug«, which is possibly the first heatable butt plug ever. A representative of the company says: »People keep telling us that they haven’t seen a heated butt plug before.«

Pipedream Products has gone through a year of transformation and is currently expanding its production facilities under a new CEO. The company has a special relationship with ANME Founders as a result of former CEO Nick Orlandino being responsible for organizing the event for the first time, so a visit to the stand of the company is something special. The company presents new products for the »Fantasy for Her« collection and a new sex doll: »Bianca Ultimate Fantasy Doll«.

Pipedream owns the well-known sextoy brand Jimmyjane, which also had new products on display, including new products in the Intimate + Care collection as well as menstrual cups.

At Screaming O‘s booth there is a huge video screen showing the company’s products. New at Screaming O is the cock ring »Ritz«. Additional novelties include Reach It! and Tri It!, which can stimulate clitoris and labia at the same time due to their specially shaped design.

At Doc Johnson, one of the few long-established companies in the industry, everything was centered on the »Booty Bling« and »Body Bling« collections and on novelties in the »Good Head« product range. Good Head products are designed to provide a better oral sex experience. New flavors like Cotton Candy, Salivating Strawberry, Wild Watermelon and Sweet Cherry are said to lead to a taste explosion when blowing and licking the partner.

Doc Johnson’s Ryann Brooks says: »Good Head has been a best-selling line for a long time and we added new flavors to attract even more people.«

Doc Johnson is a family business, as demonstrated by the presence of Erica Braverman, head of marketing and a member of the company’s owner family. She talked about Doc Johnson’s new strap-on set, the Silicone Hollow Strap-On Set. Braverman says: »The line has vibrating and non-vibrating pieces. I’m really excited about one of the harnesses in particular, because it has a clitoral stimulator located lower inside the harness, so it hits all the right areas for the wearer. And the vibe can be turned on from the harness or by the included wireless remote control.«

Kheper Games’ CEO Brian Pellham explains: »They use sticky rice paper as the adhesive, so they will stick to skin, but can be licked off or washed off with a little soap and water.«

Amber Rose’s new collection was the focus of attention at the Swedish sex toy manufacturer LELO. Also on display was the limited special edition in an expensive jewelry case for LELO’s 15th birthday. The two spectacular novelties will certainly also be on show at this year’s VENUS Berlin in October.

The lubricant manufacturer pjur Group, which has restructured its distribution network over the last 12 months, presented new massage oils for the US market, which are already very successful on the European market.

All in all, this year’s summer edition of ANME Founders seemed to be a great success for all exhibitors. The fair ended with the Storerotica Awards ceremony on July 16. Winners included XR Brands and Pipedream.

Further information and the announcement for the ANME Founders in winter 2018/19 can be found here.